Alibaba's (BABA -1.82%) stock tumbled 11% on Nov. 18 after the Chinese e-commerce and cloud leader posted its second-quarter earnings report. Its revenue rose 29% year-over-year to 200.7 billion yuan ($31.1 billion), which missed estimates by 4.3 billion yuan ($673 million). Excluding its consolidation of the hypermarket operator Sun Art, its revenue would only have risen 16%.

Those headline numbers were ugly, but did investors overreact and create a buying opportunity for more patient investors? 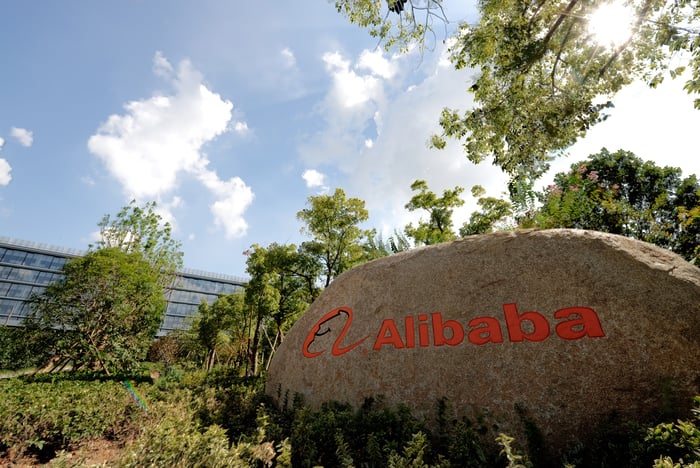 Alibaba generates most of its revenue and all of its profits from its commerce segment, which operates its online marketplaces (Taobao, Tmall, and others), its brick-and-mortar stores, its cross-border and overseas marketplaces, and its Cainiao logistics division.

A growing percentage of its revenue comes from Alibaba Cloud, China's largest cloud infrastructure platform. This segment is still unprofitable on a GAAP basis, but it squeezes out a very slim profit on an adjusted earnings before interest, taxes, and amortization (EBITA) basis. Here's how rapidly those two businesses grew their top lines over the past year:

Those growth rates seem healthy, but the commerce segment is relying heavily on the expansion of its lower-margin brick-and-mortar, online grocery, cross-border, and logistics businesses to offset the slower growth of its higher-margin Taobao and Tmall online marketplaces in China.

That pressure caused the commerce segment's adjusted EBITA margin to decline sharply over the past year, even as the cloud segment's margins improved:

That contraction will likely continue as new antitrust rules prevent Alibaba from locking in merchants with exclusive deals. Tough competition from JD.com (JD 1.00%), Pinduoduo (PDD 0.02%), and other rivals will exacerbate that pressure and force Alibaba to rely even more heavily on the expansion of its lower-margin platforms to gain more shoppers.

That's troubling, because the profits from Alibaba's commerce segment support the expansion of its unprofitable cloud, digital media and entertainment, and innovation initiatives businesses. The loss of those profits could significantly impair Alibaba's ability to expand its ecosystem.

But things are about to get even worse

Alibaba's earnings miss and contracting margins were already disappointing, but its guidance was even worse. Back in May, Alibaba claimed its revenue would rise about 30% in fiscal 2022. It reiterated that outlook in August.

But this time, it reduced that forecast to just 20%-23% growth. It attributed that big reduction to lower commerce revenue from both its direct sales and customer management (listing fees and commissions) revenue.

By comparison, analysts expect JD and Pinduoduo to grow their revenues by 29% and 83%, respectively, this year.

During the conference call, CFO Maggie Wu attributed that slowdown to competition from "more players" across China's e-commerce sector, and warned that those rivals had been "increasing investments to acquire users."

Alibaba's stock is cheap, but it isn't a bargain

Some big investors, including Charlie Munger, believe Alibaba's market dominance and lower valuations make it an undervalued growth stock. But I don't think it's a bargain, for three reasons: Its core profit engine is slowing down, its margins are dropping, and it faces too many competitors in China.

All those challenges, along with the unresolved regulatory challenges for U.S.-listed Chinese stocks in both the U.S. and China, make Alibaba seem like a value trap instead of a value play.