LeMaitre Vascular is a small-cap medical devices maker with the potential to continue growing rapidly in the years ahead.

Growth investing essentially aims to find potential multi-bagger stocks before other market participants find them. As such, I look for companies with a strong track record of growth capable of persisting into the future. It's also essential for insiders, such as those in management, to have skin in the game via ownership of the stock.

One company that, I believe, fits these criteria is the $1.1 billion (by market capitalization) medical devices company LeMaitre Vascular (LMAT 0.50%). Here are four reasons why. 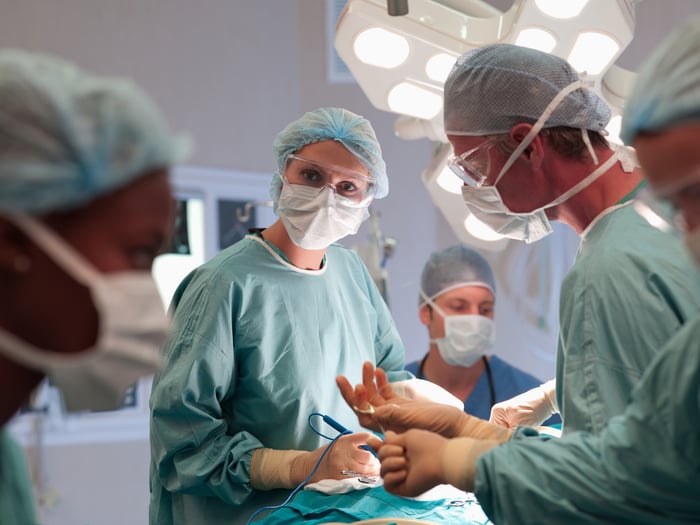 LeMaitre missed both analysts' revenue and earnings per share (EPS) estimates in the third quarter. The Burlington, MA-based company reported $38.4 million in revenue during the quarter, which was a 5.4% increase compared to the year-ago period. This, however, fell 1.7% short of the analyst revenue consensus of $39.1 million for the quarter.

But even with that being the case, the company's operating fundamentals appear to still be intact. Paraphrasing Chairman and CEO George LeMaitre's remarks during the company's Q3 2021 earnings call, LeMaitre's approximate $1 million miss on its guidance midpoint for the quarter was a direct result of the Delta variant.

As various geographies around the U.S. experienced another wave of COVID due to the Delta variant, hospitals delayed elective surgery in order to treat COVID patients. Since LeMaitre derives its revenue from the products that it sells to surgeons for elective procedures related to peripheral vascular disease, this weighed on its results in the third quarter.

There are two reasons why LeMaitre's diluted EPS declined and why I'm not worried about the company in the long term. First, LeMaitre increased its employee headcount by 14% in the third quarter in its effort to normalize its headcount once it moves out of COVID. This was largely responsible for the 13% decline in net income during the quarter. Second, the company issued 1 million shares in July in order to fully repay its borrowings and for general corporate purposes such as working capital and capital expenditures. This increased the outstanding diluted share count by 7.1%, which in effect lowered diluted EPS.

Even with a slightly elevated share count and COVID headwinds, LeMaitre still anticipates that its midpoint revenue will increase 20% this year to $154.9 million. In addition, the company expects its midpoint diluted EPS to soar 24% for this year to $1.29.

As I alluded to earlier, another major strength for LeMaitre is that the company has entirely repaid its borrowings. And on top of that, LeMaitre has a significant cash and marketable securities position.

As of the third quarter, LeMaitre had $67.1 million in cash and marketable securities against no long-term debt, which is nearly 6% of the stock's market cap. This provides the company with plenty of liquidity to fund research and development and consider potential acquisitions to drive growth outside of its existing product portfolio.

LeMaitre is doing well fundamentally, but what's equally as important is that the company's employees and executive team have the incentive to work on behalf of what is best for shareholders. And with more than $130 million of the stock – 11.7% of the company being held by insiders, there's a high probability that the company's insiders will do what they believe will generate the most wealth for themselves and their fellow shareholders.

LeMaitre is worthy of its premium

That's because LeMaitre's forward P/E ratio of 38 is barely 10% higher than the industry average of 34.3. LeMaitre has a track record of growing its EPS by nearly 20% annually over the past five years. And I believe that this can continue as the global population ages and peripheral vascular disease grows in prevalence, resulting in a steadily growing demand for LeMaitre's products.

Growth investors looking for a promising stock should consider LeMaitre, and any weakness in its share price going forward should be seen as an opportunity to accumulate more shares in their portfolios.

Is This Small-Cap Dividend Stock a Buy?

Is This Underfollowed Dividend Stock a Buy?