I have a confession to make: I like stock buybacks.

In fact, if you go through every stock I've ever owned, at least 90% would show consistently decreasing share counts. Over time, repurchases often go unnoticed, and share counts dwindle. Earnings per share rise. It's a beautiful thing.

Some days, though, I feel like the only one. Last week, Jason Zweig of the Wall Street Journal opined on buybacks, stating that they should be looked at cautiously. Corporate suits have a track record of buying back more stock when share prices are high, after all.

Zweig's cautionary article is just one of many. Stock prices are trudging higher. A dollar reinvested at today's prices isn't buying as much earnings as it might have bought in...say, 2010.

But is that true? I don't think so. In fact, a dollar used to buy back stock may be better invested than a dollar paid out as a dividend.

The numbers that matter
This week, I watched as the financial industry pleaded for the acceptance of the Federal Reserve. Financial institutions with more than $50 billion in assets submitted dividend and buyback plans to the Fed for approval.

Most passed with flying colors, winning new payouts for investors.

In one notable example, American Express (NYSE:AXP) and Discover (NYSE:DFS) will spend $7.8 billion to repurchase shares over the next 4 quarters. At the same time, they'll distribute only $1.6 billion in combined dividends.

Repurchases won. It's almost rare in the financial space -- FactSet reveals the financial sector had the third-worst buyback yield of the 10 stock market sectors. 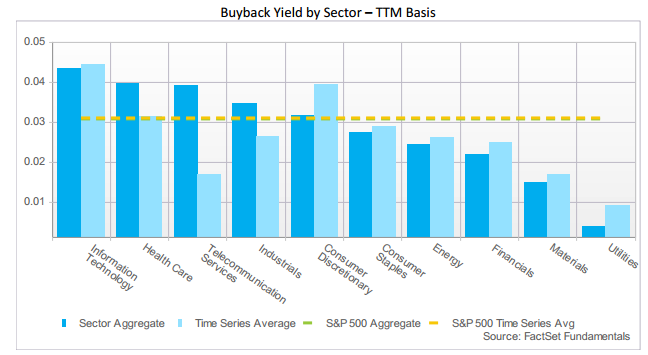 But I'm not shocked, or even remotely surprised by new buyback activity. I think the resurgence of repurchases is systemic, and almost predictable. Paying out dividends is too expensive.

Thinking like an executive
When dividend tax rates were adjusted to include a bracket as high as 23.9%, it wasn't ordinary Americans that took the hit. It was the wealthiest of investors. These wealthy investors are the type we tend to see at the top of the corporate food chain.

Dividends have a cost. At a top rate of 23.9%, the wealthiest investors see only $0.761 of each dollar paid in the form of a dividend. Each dollar reinvested at the corporate level in repurchases, however, is equal to $1. Uncle Sam never gets his cut -- at least not now, it's deferred until shares are sold at a gain.

Naturally, that means buybacks are most preferable to the kind of people who make dividend or repurchase decisions in America's biggest companies.

Buying back stock at a 24% discount
The top dividend tax rates also means corporate executives don't need to be good market timers when repurchasing shares. A repurchase buys 31% more stock than a dividend and subsequent repurchase, considering the effect of taxation.

Said another way, a repurchase is like buying stock at 76 cents on the dollar when dividends would otherwise be reinvested. Warren Buffett has explained this rationale for why Berkshire Hathaway (NYSE:BRK.A)(NYSE:BRK.B) doesn't pay a dividend.

These economics aren't in play for all shareholders. Certainly not for me. Higher taxes only affect those who earn substantially more than I do. But I think it would be a mistake to ignore the changing tax code, and higher dividend taxes, when questioning the efficacy of repurchases. Higher taxes have made repurchases less expensive for the people who call the shots. Naturally, they'll choose repurchases over dividends.

The point is higher dividend taxes won't affect everyone. But it will affect virtually every executive who has a say in setting dividend or repurchase policies. It's a buyback world, and it will be for a long time.