International Business Machines (NYSE:IBM) hasn't been much of a dividend stock during the past decade. Excluding a brief period during the financial crisis, IBM's dividend yield has typically been well below 2%. IBM has been consistently raising its dividend, but the yield has always been far lower than those of other large technology companies.

This picture has started to change, though, with the yield on the rise during the past couple of years. The recent turmoil dragging down the stock price has pushed IBM's dividend yield to about 2.7%, higher than Microsoft, Intel, and Apple. 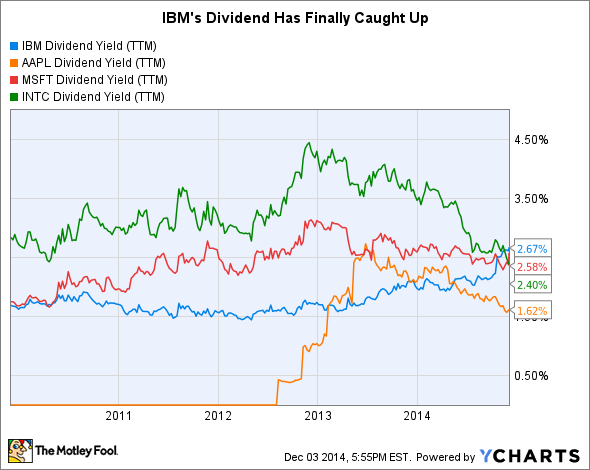 Here are two reasons IBM is now a top dividend stock that investors should consider.

The dividend growth potential is huge

While this history is a good sign that IBM is committed to continuing the trend of ever-rising dividend payments, it's important to examine whether the company's financial situation can support higher dividends. During the past decade, dividend growth has outpaced EPS growth, and that's something that can't continue indefinitely.

Thankfully for IBM investors, there's still plenty of room to grow the dividend, even if the company fails to meaningfully grow earnings as it muddles through its current problems. During the past 12 months, IBM's EPS, excluding the effects of the company's divestment of its foundry business, was $15.60. This compares to dividend payments during that time of just $4.10 per share, for a payout ratio of 26%. This is well below the payout ratio of other large technology companies like Microsoft and Intel.

IBM could double its dividend tomorrow without problem, but the company has always put an emphasis on share buybacks, and this will limit how quickly the dividend grows. From 2009 through 2013, IBM paid out $17.3 billion in dividends and bought back $63.7 billion in stock, so it's clear which method is the priority.

Still, it would take another five years of 10% dividend increases before the payout ratio reached 40%, assuming that earnings don't grow at all during that time, and the effect of share buybacks reducing the share count would actually extend this further. If IBM buys back 5% of its shares each year -- about $8 billion at the current market capitalization -- it would take closer to nine years of 10% dividend increases to reach 40%.

IBM has the capability to continue to raise its dividend by double-digit percentages for a long time. Coupled with a 2.7% yield, that makes the stock a very attractive proposition for dividend investors.

IBM's business is stronger than it appears
Of course, continued dividend increases can only occur if IBM's earnings don't collapse, and recent developments seem to point to trouble for the company. IBM recently withdrew its previous EPS guidance for 2015 after reporting disappointing earnings, and its guidance for this year suggests that earnings are set to decline slightly.

The last time IBM had serious problems was in the early 1990s, when the rise of the PC led to a collapse of the mainframe market, catching a bloated IBM off guard. IBM went from billions of dollars in annual profits to billions of dollars in annual losses in a few short years, and it took radical changes to keep the company alive. IBM shed low-margin commodity businesses and focused instead on high-value, high-margin products. Software and services, along with a much smaller, but still lucrative, mainframe business, brought IBM back from the dead.

Today, the big disruptive technology is the cloud, and IBM is again being viewed as a dinosaur. But IBM is in a far stronger position today than it was in the early '90s, and it's been investing heavily in cloud services in order to stay ahead of the curve. IBM's traditional services business is certainly under threat, and the company will have some ups and downs as it transitions its business model, but at this point, there's no reason to believe that IBM is facing an insurmountable challenge.

Expecting any business to grow earnings every year without the occasional struggle is unrealistic. One of IBM's strengths is its ability to transform its business, and that's exactly what's happening today. The dividend is well supported, even if a significant drop in earnings were to occur. While the news of more layoffs and revenue declines may be discouraging, IBM is taking the steps necessary to remain relevant in the future.

IBM's dividend is extremely attractive, more so than at any time during the past decade. The low price enabled by the recent sell-off has created an opportunity for dividend investors.