Shares of Arch Coal hit a 52-week low today. Let's look at how it got here and see whether a cloudy forecast lies ahead.

How it got here
Two primary drivers have led much of the coal sector to new 52-week lows. First, decade-low natural gas prices are leading many electric utilities to switch to the cleaner-burning, and now cheaper, fuel source to create electricity. Natural gas prices aren't showing any signs of rebounding despite the best efforts of the United States' largest natural gas producer, Chesapeake Energy to curtail much of its dry gas capital expenditures in 2012.

Secondly, a slowdown in China's GDP growth has the market worried. China's imports are what have kept metal and resource stocks moving higher, and without that growth there's fear that these imports, including coal, may suffer.

Many of Arch's counterparts have already begun shuttering mines in anticipation of a slowdown, including Patriot Coal , which closed three mines in January, and CONSOL Energy , which recently announced the closure of a mine in Virginia and the reduction of operations to just five days a week.

How it stacks up
Let's take a look at how Arch Coal stacks up next to its peers. 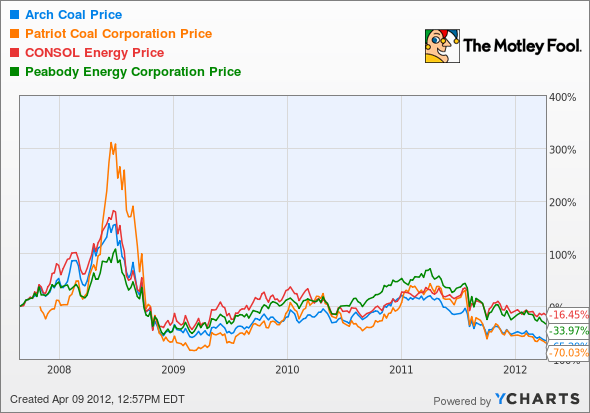 Keeping the recent tradition alive, energy stocks continue to race each other to the bottom. The real differentiating factor between these stocks lies in these metrics:

There's a reason Arch Coal has been a company on my own personal "to buy" list, and the data shows it. CONSOL is a great company, but with it, too, cutting back on its operations, I don't think anyone wants to pay 2 times book for it. Similarly, Wall Street isn't expecting a profit from Patriot in 2012. What this really comes down to is Peabody versus Arch, and with nearly triple the dividend yield and half the book value, Arch takes the cake as my best value in the sector.

What's next
Now for the real question: What's next for Arch Coal? That question really depends on whether the company can remain profitable in light of the weakness in coal demand related to low natural gas prices.

Our very own CAPS community gives the company a four-star rating (out of five), with 96% of members expecting it to outperform. I am one of those 96% who have made a CAPScall of outperform on Arch Coal, although my performance is looking pretty dismal at the moment: minus-56 points. However, trading so far below book value and with a very sustainable dividend (as long as Arch remains profitable) makes this a company that's too enticing to pass up. I am getting very close to pulling the trigger on Arch for my personal portfolio -- when the Fool's disclosure policy allows for it, of course.

Craving more input on Arch Coal? Start by adding it to your free and personalized Watchlist. It's a free service offered by The Motley Fool to keep you up to date on the stocks you care about most.