When others are fearful, be greedy!

"Investors should remember that excitement and expenses are their enemies. And if they insist on trying to time their participation in equities, they should try to be fearful when others are greedy and greedy when others are fearful."
-- Warren Buffett

It's pretty easy to be down on the coal sector right now. From an environmental and social perspective, each pound of bituminous coal (the type used in electrical generation) emits between 1.7 and 3.2 pounds of carbon dioxide according to data on ThinkGlobalGreen.org.

From a fundamental perspective, coal is encountering a three-pronged problem. First, decade-low natural gas prices are coercing electric utilities to switch to natural gas for electricity generation since it's cheaper than coal. Second, slowing growth in China, the world's largest user of coal, has shareholders worried that import levels could stall or shrink. Finally, the abundance of new technology, including solar, wind, and hydroelectric power, has green industries abuzz with their possible applications.

Let's face it, this is an easy argument to go along with and it's one of the reasons my fellow Fool Travis Hoium came out against coal so harshly last week. But I'm all for preaching Warren's words of wisdom and diving headfirst into a sector when things appear their bleakest. Let me tell you why I feel coal is too enticing of an investment to pass up right now.

The capital costs
While many would love to see natural gas replace coal-fired plants as the primary mode of electrical generation, that just doesn't seem feasible at the moment. Based on research from the Aspen Environmental Group in 2010, it would cost $743 billion to completely upgrade coal-fired plants to be natural gas ready. Let's take a closer look at how the costs of that $743 billion bill would break down.

The new pipeline needed to maintain these plants would cost $348 billion alone and could take years, or even decades, to install. In addition, there are training costs, and natural gas gathering facilities and underground storage units would need to be built. The last time I looked, neither the U.S. government nor many electric utilities were sporting the cash to make this a reality.

The infrastructure isn't there
The truth of the matter is that, at least for now, most alternative energy technologies are just a pipe dream. There's a reason Chrysler will only build roughly 2,000 of its new bi-fuel Ram 2500 HD, capable of running on natural gas and gasoline: a lack of infrastructure. There are, according to CNBC, only 505 CNG fueling stations in the entire United States, and the costs of converting these vehicles to cleaner-burning natural gas creates a sticker shock that could take the owner years to recoup (if ever!).

The same can be said for the solar sector. At the moment, solar subsidies are drying up worldwide and solar panel prices continue to fall. The lesson is simple: If a technology isn't practical, the market will continue to adjust its price down until it becomes practical. For solar panel manufacturer First Solar , which is idling much of its generating capacity and recently reduced revenue estimates again by $200 million, this couldn't be truer.

It's simple push-pull economics
To me, the math behind why coal makes sense seems pretty simple. At some point during the conversion of coal-fueled plants to natural gas, the increased demand would stretch the natural gas supply beyond its limits and cause its price to rise dramatically. Similarly, the weakening demand for coal would cause its price to drop to increasingly attractive levels.

This is exactly the reason why natural gas companies have almost unanimously been proactive in reducing their capital expenditures this year. Chesapeake Energy , responsible for 8% of the nation's natural gas production, recently announced it would curtail the number of dry gas drilling rigs in operation by 50%, with Canada's EnCana also announcing steep cuts in its capital expenditures.

We can't go cold turkey
I'd compare coal consumption to cigarette smoking, but there's just no way we can go cold turkey on the energy resource that's responsible for 45% of all energy generation in the U.S. and 41% worldwide. You may refer to coal companies as evil, but these stocks make a product that is a necessary evil to power our everyday lives.

The valuations are too enticing
Finally, and most important, the valuations on coal companies are as cheap as I can ever recall. Excessive fear-mongering in the sector coupled with the worries listed at the beginning of this article have created what I feel are bargain-basement prices in many coal stocks. 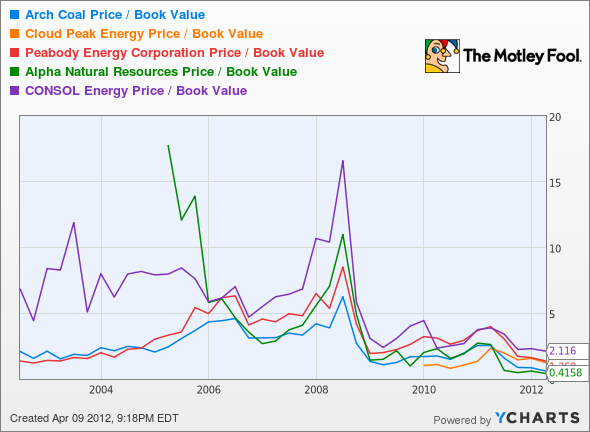 At just 60% of book value, Arch Coal appears to be the steal of the sector. Its dividend yield of 4.3% dwarfs that of nearly every other coal producer and its price-to-cash-flow value of three is well below its decade-long average. Because of its reliance on coal exports to China, I feel this is the perfect time to take advantage of the overwhelming negativity surrounding the "slowdown" to 7.5% GDP growth in that country and consider buying into Arch Coal.

If you prefer larger operations, Peabody Energy has resisted the trend in the sector to close mines in the face of weakening demand. With an earnings yield of 13.6%, a dividend yield of 1.2%, and a forward P/E even lower than Arch's at 6.4, Peabody is offering investors a chance to own one of the nation's largest coal operations at just a fraction of its decade averages.

Foolish roundup
Coal isn't a perfect solution to the energy sector's problems, but it is a long-term answer to meeting our energy demands. This isn't to say that new technologies won't be made and implemented, because they will -- but the magnitude of these new platforms will be small and their rollout agonizingly slow. The entire coal sector is priced at levels that are far too enticing to pass up, and I encourage you to check into these companies for yourself and see why coal could be the answer to the pressing question on everyone's mind: "What should I buy?"

What do you think: Is coal a long-term solution or on its way out? Tell me and your fellow Fools your thoughts in the comments section below.

Coal and natural gas may be all the rage right now, but our analysts feel there's only one energy stock you'll ever need. Find out for free what stock could power your portfolio higher by clicking here!

Editor's note: A previous version of this article stated that General Motors builds the Ram 2500. The Fool regrets the error.

Despite All This Year's Stock Market Woes, Wall St's "Fear Index" is Holding