Shares of RF Micro Devices just hit a 52-week low yesterday. Let's look at how the company got here and see whether clouds are still in the forecast.

How it got here
Weakness in the shares of RF Micro Devices can be summed up by the company's transitioning its product line to cater to faster and higher-margin 3G and 4G phones and away from cheaper, slower 2G models. The problem with this transition is that most of RF's revenue is tied up in the legacy businesses that it's trying to vacate, which is making it very difficult to forecast sales and earnings.

It also doesn't help that 2G models sales are weaker than ever in China, as consumers are choosing instead to step up in price and purchase smartphones. In addition, RF's heavy reliance on Nokia as a vendor for its lower-margin products is hurting sales, since consumers are fleeing en masse from nearly all of Nokia's products. That is the perfect storm that crushed shareholders' hopes and dreams.

How it stacks up
Let's see how RF Micro stacks up next to its peers. 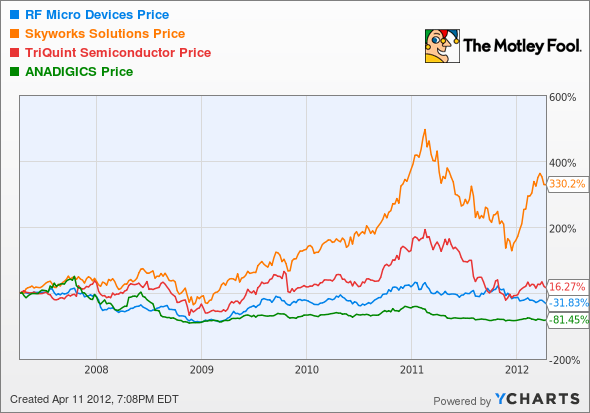 You can see, plain and simple, the incredible effect of having your products inside Apple's iPhone – specifically in the performance of Skyworks Solutions and Triquint Semiconductor .

Here's where you can really see the Apple effect in full swing, with Skyworks and Triquint showing remarkable growth over the past five years.

RF Micro's growth has been a bit deceiving: If we looked at a four-year CAGR instead of five, RF Micro's growth rate would dip from 6.4% to paltry 0.5%. Even worse than warning that its earnings wouldn't be up to par in January was its cautioning just three weeks later when it did report its results that the following quarter would be weaker than expected as well. At least RF Micro shareholders can be thankful their company has remained profitable, something Anadigics shareholders can't claim. These metrics paint a clear picture of why RF Micro's peers are leaving it in the dust.

What's next
Now for the real question: What's next for RF Micro Devices? That question really depends on how quickly the company can transition out of its legacy products and into its higher margin-power amplifiers and Wi-Fi components. If the past few quarters are any indication, this could be a very slow process.

Our very own CAPS community gives the company a four-star rating (out of five), with 707 of 750 members rating it as an outperform. There's a reason I have yet to make a CAPScall on RF Micro, and that's because I'm brutally undecided on the company. Based on its recent earnings reports and its reliance on Nokia, it's very clear that its sales, and possibly profitability, will struggle for many quarters to come. Then again, RF has been fiscally prudent with its spending and maintains $138 million in net cash on its balance sheet, so there doesn't seem to be much downside left in the stock as long as it remains profitable. If I had to place my bet, I'd say this one remains relatively range-bound over the next year or possibly longer.

Craving more input on RF Micro Devices? Start by adding it to your free and personalized Watchlist. It's a free service from The Motley Fool to keep you up to date on the stocks you care about most.