Shares of Ross Stores just hit a 52-week high on Friday. Let's take a look at how the company got there and whether clear skies are in the forecast.

How it got here
Ross Stores -- and to the same extent TJX -- has benefited from being able to bring the sudden allure of brand-name and designer merchandise to cost-conscious consumers at a discount price. Both of these retailers find themselves within the golden niche in the retail sector of not being so cheap that consumers avoid the store when they do decide to make discretionary purchases, or too expensive that cost-conscious customers pass up their stores altogether during hard times. The latter is what happened to Abercrombie & Fitch , as its styles could be similarly reproduced by other retailers for a fraction of the price, and consumers simply traded down.

Ross Stores has been on an almost-unabated uptrend for nine months now, which it also owes to putting a good mix of product in front of consumers as well as a relatively warm winter. You've often heard me say that same-store results are tough to compare given a harsh winter, which keeps consumers holed up in their homes, but I'd suspect Ross would be one of the very few outperformers even if weather conditions hadn't been favorable.

How it stacks up
Let's see how Ross Stores stacks up next to its peers. 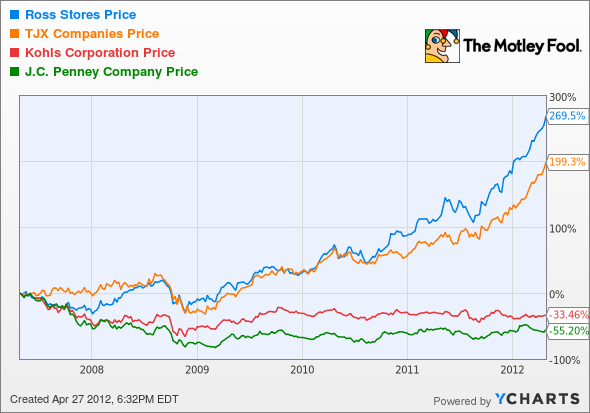 As you can see, if you have a formula that works, stick with it! J.C. Penney finally realized its discounting approach wasn't working, so it recently changed its pricing strategy.

The first thing you'll notice is the premium investors will pay for a product line that works. Both Ross and TJX reported double-digit same-store sales growth in March, but from the number above, you can see that Ross offers investors roughly the same value as TJX, yet has the faster growth rate over the past five years. J.C. Penney's pricing strategy crushed its margins over the years, and the company hopes its new no-discount strategy will allay growth worries -- though only time will tell if that's true. Kohl's is a brand-name clothing discounter that I would have expected to do better, but it has struggled with offering its consumers discounts so large that they're affecting its growth prospects. All in all, Ross and TJX have the right retail formula for success at the moment, with Ross offering a marginally better valuation than TJX.

What's next
Now for the real question: What's next for Ross Stores? That answer really depends on whether or not consumers keep moving toward higher-price-point discretionary items, and whether Ross can continue to put the correct product mix and designer names in its stores to meet consumers' wants and needs. Up until now, Ross has been a magician at predicting consumer trends, but history has shown that all retailers eventually succumb to changing consumer trends -- just something to keep in the back of your mind.

Our very own CAPS community gives the company a four-star rating with an overwhelming 91% of members expecting it to outperform. Although I haven't made a CAPScall on Ross Stores, it remains implanted on My Watchlist for future reference.

The reason I haven't pulled the trigger yet on Ross is primarily its valuation. The retail sector is based on peaks and troughs and Ross' moves recently have been straight up. It clearly has a pricing model and a product mix that can't be rivaled at present, but it wouldn't take a huge change in consumer habits to knock Ross off its 52-week highs. I remain bullish on the company's long-term outlook, but I'm waiting for a decent pullback in the stock's price before I make that CAPScall of outperform.

Craving more input on Ross Stores? Start by adding it to your free and personalized Watchlist. It's a free service from The Motley Fool to keep you up to date on the stocks you care about most.

If you'd like the inside scoop on three more American companies that could be on the precipice of huge profits, then simply click here and download a copy of our latest -- and free! -- special report.