Shares of Western Digital hit a 52-week high recently. Let's look at how it got here and see whether clear skies are ahead.

How it got here
The Thailand floods last year crippled much of the hard-drive industry last year, although it hurt Western Digital much more than its closest competitor, Seagate Technology .

Western Digital has been on the path to recovery, starting off this year with a second-quarter earnings report that beat the Street's estimates. The silver lining was that the shortage of hard drives boosted unit prices, driving gross margins higher in the process. In March, the company closed its acquisition of Hitachi's data-storage business that it had announced a year prior.

Last week, Western Digital hit a fresh 52-week high ahead of its third-quarter earnings release, only to knock shares down by 14% the following day. Ironically, Western Digital's speedy recovery is leading to fears of falling prices, which is what caused the sell-off.

How it stacks up
Let's see how Western Digital stands up to its storage peers, including those that specialize in solid-state drives, or SSDs. 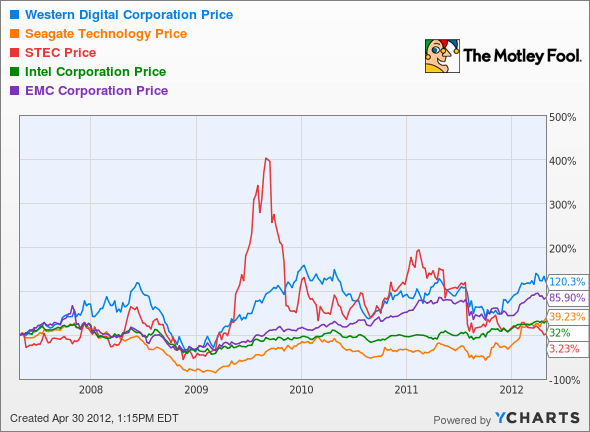 We'll include some additional fundamental metrics for a deeper look.

One thing to keep in mind when looking at Seagate's seemingly stellar ROE is that it uses more leverage than Western Digital to get there. It has total debt-to-equity of 1.74, compared with Western Digital's 0.96 figure.

SSD specialist STEC has been lagging for years, following a spectacular spike in 2009, while Intel offers its own flavor of SSDs to complement its core chip business. EMC sells consumer-based drives through its Iomega subsidiary, while storage arrays remain its main flame.

What's next?
Western Digital and Seagate are the two big fish in the hard-drive industry, and they've gotten bigger as the sector consolidates. Both are keenly aware of the slow migration to SSDs and will be ready to provide them as those high costs keep coming down, spurring adoption in the process.

Interested in more info on Western Digital? Add it to your Watchlist.