Session border controller specialist (SBC) Acme Packet reported fiscal-first-quarter 2012 results last night. For those watching the after-hours action and trading this morning, there's clearly some ambivalence among investors over how to take the results.

Shares dropped 8% from where they closed, only to jump to a 13% gain minutes later. Acme Packet opened higher this morning, yet shares are flirting with breakeven as of this writing. What's going on?

Can I get your digits?
Revenue declined 4% to $70.8 million, and non-GAAP net income similarly fell to $12.2 million, or $0.17 per share. These figures were mostly in line with the Street's forecasts, so there weren't any real surprises one way or another on that front. Product revenue fell by 11% to $53.5 million, which is one thing I had my eye on. Verizon chalked up 16% of this quarter's revenue, a meaningful jump as Big Red's business was 10% or less of revenue for the past two quarters.

On the conference call, CEO Andy Ory said the company continues to try to improve visibility toward the tail end of the year, while reaffirming the previously given outlook of 10% top-line growth for the full year. He also cited third-party figures that put Acme Packet's SBC market share at 57% last year, while also claiming 34% of the enterprise market.

It's only a matter of time
The company saw some bumps over the past two quarters as slowing capital expenditures from North American service providers, which primarily refers to top dog carriers AT&T and Verizon, hurt Acme Packet's figures (and credibility). Ory isn't expecting that to change much next quarter, but it should improve in the second half. That being said, he figures a "conservative view" is still appropriate for the time being.

Acme Packet is still banking on the inevitable shift to Voice-over-LTE, or VoLTE, which is just now beginning. It's facilitating the rollout of VoLTE for MetroPCS , which is also expected to happen during the second half of 2012. MetroPCS was originally targeting Q1 2012, but was forced to delay for various reasons related to repurposing its spectrum.

Big Red is already testing out VoLTE in a couple of markets, but isn't expecting a national rollout until next year, same as Ma Bell. That plays well with Ory's expectations of "meaningful investment in VoLTE solutions in 2013, which will in turn lead to increased contribution to our revenue."

A little pick-me-up
Just last week, Acme Packet announced that it had acquired privately held IPTEGO, a smaller IP communications network management software player based out of Germany for about $21 million in cash. Ory said the acquisition should help Acme Packet expand its capabilities and value-added services, bundling its Palladion software package with Acme Packet's products.

The acquisition will hold back the bottom line this year, as CFO Peter Minihane now expects full-year non-GAAP earnings per share between $0.91 and $0.95 due to the purchase. The company was previously aiming for $0.96 to $1 per share. It should be worth it in the longer term, though, if the acquisition helps drive revenue growth with an integrated offering.

Calling the bottom?
Acme Packet may very well be in the process of bottoming out, as shares have already lost roughly two-thirds of their value from the all-time high set a little over a year ago. Shares aren't cheap at 45 times earnings, but Acme Packet has a compelling story and clear leadership. The global shift to VoLTE is an inevitability that the company will bank on. 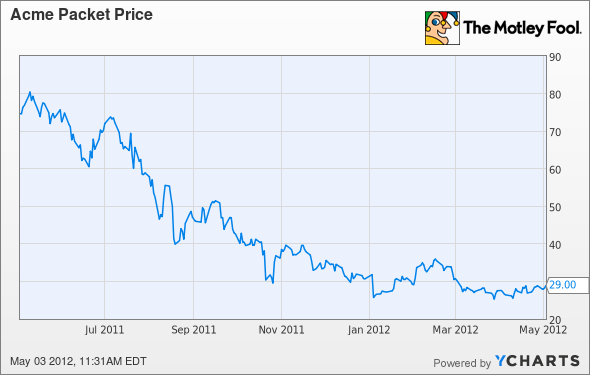 It's admittedly been a rough few quarters and this quarter wasn't anything to call home about (but it also wasn't a disappointment), but current prices look attractive for opportunistic bulls looking for a bottom as shares look to have found a support level. It might take time for growth to begin reaccelerating, but all things come to those who wait.

Ory seems to have learned his lesson with overconfidence, and the emphasis on improving visibility going forward earns him points in my book. I'm going to follow up with an outperform CAPScall today, since I think Acme Packet's darkest days are behind it.

Acme Packet is looking to tap into global growth. That's a key growth driver for many companies, especially these "3 American Companies Set to Dominate the World." These players are already tapping emerging-market growth in hot regions like China and India. Check out the free report now.