There's no metric investors turn to more often than a company's price-to-earnings ratio. Most of the time, it lets investors know whether they are paying too much or getting a deal on a stock. For many investors, anything with a P/E of more than 30 is too pricey.

Sometimes, however, the steadfast reliance on P/E can eliminate some of the greatest companies from one's retirement portfolio. Below, I'll give you three different instances in which you'd be better off ignoring the P/E ratio, and at the end, I'll offer a special free report on three companies that will help you retire rich.

Earnings are just getting started
For companies that have just swung from operating in the red to turning a profit, earnings per share are often minuscule. This sets up a situation where no matter what the price of a stock is, it looks wildly overvalued. Usually, looking at what earnings are predicted to look like in a year or two can be more informative.

Universal Display makes devices with organic light emitting diodes. In plain language, it makes and holds patents on the lights used in flat-screen TVs, smartphones, and a host of other products. Because OLEDs generally require less energy than other forms of lighting, the runway for growth is extensive.

Obviously, a company with such potential demands a high price, but with earnings per share of just $0.30 over the past 12 months, the company has a P/E of around 120. Though that looks ridiculous now, S&P Capital IQ estimates peg the company's earnings at $2.38 per share by 2014, which means it's trading at a much lower multiple of about 15 times its estimated 2014 earnings.

Much the same is the case with LinkedIn , the professional-social-networking site. Contrary to what some may believe, the company has three steady streams of revenue growing quickly. In fact, the company just released figures showing revenue grew by 101% last quarter.

With trailing-12-month earnings per share of just $0.15, the company's P/E currently sits above 750. As earnings grow, this number will undoubtedly sink.

Mr. Market's showing some respect
Another reason that shares may be bid to the point where a company looks expensive is because it's highly respected. Investors are willing to pay a premium for high-quality companies growing at a fast clip. By avoiding companies with high P/Es, you may very well be throwing away a chance at owning our generation's greatest companies.

Baidu , for example, trades at 36 times earnings, which looks a little pricey. But as fellow Fool Rick Munarriz points out, there's no doubting the growth of this Chinese search giant. The company has grown earnings by an astounding 80% per year over the last five years, as more and more Chinese citizens come online.

Another clear example of a stock highly respected by the market is 3D Systems , which sports a P/E over 40. The company is on the cutting edge of 3-D printing, a technology that promises to change our world the same way the personal computer did in the 1980s and 1990s. Our top analysts at the Fool have already tapped the company as one that can "take manufacturing to a new level." Earnings grew 81% in 2011 versus 2010, and analysts expect EPS to nearly double next year compared to their 2011 levels.

Building an impenetrable moat
The final reason some companies have a high P/E is that they are spending money to build a sustainable competitive advantage. Such is the case with Amazon.com .

Amazon is building out its array of fulfillment centers across America right now. That costs the company billions of dollars. But those investments not only allow the company to deliver to customers in the blink of an eye, they build a huge moat around Amazon.

In order for any company to come close to offering the same service to customers as Amazon does, a competitor would have to be hugely unprofitable for a long time to match Amazon's scale. And consider this: Once the build-out of centers decelerates, there will be far more revenue dropping to the bottom line than there's ever been before. 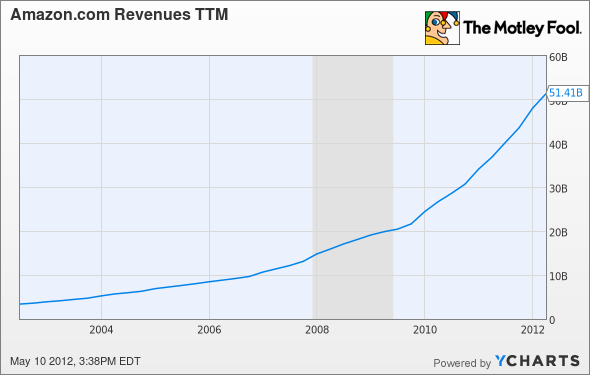 What's a Fool to do?
Let's be clear: I'm not saying that any of these companies are necessarily cheap, or the best deals on the market. What I am saying is that sometimes, the P/E metric can be misleading. Whether it's because the company is just becoming profitable, is highly respected by the market, or is simply building an impenetrable moat, there are lots of good reasons to buy into high-P/E companies.

As I said at the beginning, you want to make sure your retirement portfolio has the best of the best companies included. We've prepared a special free report to help you: "3 Stocks That Will Help You Retire Rich." One of those three companies is actually mentioned in this article. To find out which one it is, get your copy of the report today, absolutely free!