Shares of Biogen Idec hit a 52-week high today. Let's take a look at how the company got there and whether clear skies are still in the forecast.

How it got here
Biogen Idec's success has everything to do with its focus on the multiple sclerosis and autoimmune landscape thanks to its key drugs Avonex, Rituxan, and Tysabri, as well as exciting new treatments waiting in the wings.

Avonex, its best-selling treatment for multiple sclerosis, accounted for 51.2% of revenue in its latest quarter. Investors' big fear had been what Biogen Idec would do once this blockbuster lost its patent expiration, but thanks to a method-of-use patent issued in 2009, Biogen Idec will maintain exclusive rights to the drug through 2026, ultimately easing investors' minds.

Rituxan, a treatment for non-Hodgkin's lymphoma and rheumatoid arthritis shared with Roche-owned Genentech, added 22.1% of Biogen's total revenue in the first quarter and sales for the drug rose by 11% year over year.

Tysabri, a drug used to treat multiple sclerosis and Crohn's disease, also totaled 22.1% of Biogen's sales in the first quarter. The drug, sold in partnership with Elan , saw sales jump by 14% over last year. For those of you keeping track at home, that is indeed 95.4% of total revenue from just three drugs.

The next big drug potentially waiting in the wings at Biogen is BG-12, an oral MS drug that nearly cut the relapse rate in patients by half if given twice daily. In comparison, Copaxone, an oral MS drug offered by Teva Pharmaceutical , generated only a 29% relapse rate cut. Biogen anticipates the drug will hit the U.S. and worldwide markets by early 2013.

How it stacks up
Let's see how Biogen Idec stacks up next to its peers. 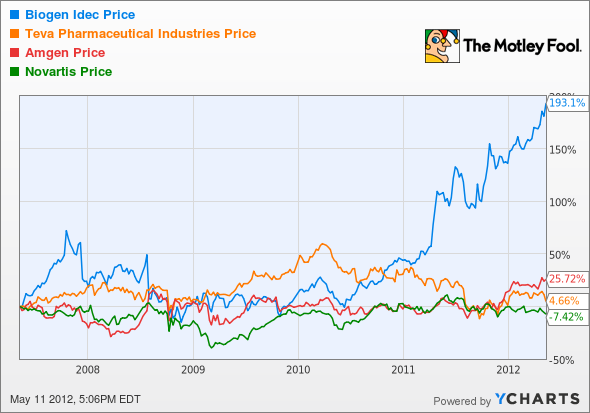 With Biogen's three primary drugs Avonex, Rituxan, and Tysabri protected from patent expiration through 2026, 2015, and 2015, respectively, investors have had little to worry about in recent years and have sent the stock screaming past its peers.

Despite having a wide gambit of metrics above, each company offers its own individual set of risks and rewards.

Biogen trades at the most aggressive valuation, but it also has one of the safest pipelines thanks to those far-off patent expiration dates mentioned above. Teva offers investors the comfort of generic drugs, which gives the company a seemingly endless supply of potential drugs. However, it also has its own branded drug segment led by Copaxone, a drug that produces roughly a fifth of Teva's annual sales that's just a few years away from its own patent expiration. Amgen is a rarity among biotech companies in that it offers a healthy 2.1% yield, but as you can see, it's really lagged behind in the growth department. Novartis offers the highest dividend yield to value investors, but it also is preparing to lose its blockbuster high-blood-pressure treatment Diovan to patent expiration in September this year and is expected to grow the slowest over the next five years.

What's next
Now for the real question: What's next for Biogen Idec? That question really depends on whether it can use this very rare patent-expiration-free moment of its existence to expand its pipeline beyond just three primary drugs. A heavy reliance on just a few drugs could be crippling to the stock's performance down the road; just ask Forest Labs' shareholders.

Our very own CAPS community gives the company a three-star rating (out of five), with 91.4% of members who've rated it expecting it to outperform. Although I have yet to personally bestow a CAPScall on Biogen Idec in either direction, I am definitely leaning more toward an outperform call rather than an underperform call, but would much prefer a pullback first.

Biogen Idec is a cash cow that has a good three to four years before it needs to even remotely worry about its cash flow. By then BG-12 should have had two years to fully get up to speed and other aspects of its pipeline should be hitting the FDA's desk for possible approval. The big news, however, continues to be its stronghold in the MS market. As long as Biogen controls a decent chunk of MS-based revenue, it will remain a compelling buy. Now where's my pullback?

Biogen Idec clearly has a pipeline that's changing lives. If you'd like the inside scoop on a stock our Motley Fool Rule Breakers team feels could offer the next revolutionary product, then click here for your free access to your latest report.

Craving more input on Biogen Idec? Start by adding it to your free and personalized watchlist. It's a free service from The Motley Fool to keep you up to date on the stocks you care about most.