Shares of Exelon hit a 52-week low on Monday. Let's take a look at how it got there and whether cloudy skies are still in the forecast.

How it got here
Understandably, utilities are not having as strong a year in 2012 as they did in 2011. However, for some electric utilities, like Exelon, it's been particularly rough.

Exelon hasn't had that luxury since it's the largest operator of nuclear power plants in the United States. Nuclear power has had a hard time competing against the low costs of natural gas, and the tragic occurrence in Japan at the Fukushima power plant relating to the March 2011 earthquake has made getting approval from the Nuclear Regulatory Commission a difficult task -- not to mention the expensive costs to build new plants.

Still, nuclear power remains a clean form of energy, and we have seen licenses approved by the Regulatory Commission to build two new reactors apiece to both SCANA and Southern Co. .

How it stacks up
Let's see how Exelon stacks up next to its peers. 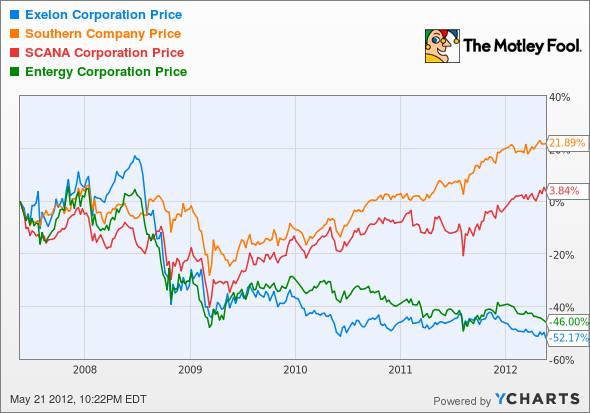 As you can see, the two companies that are the most reliant on nuclear energy, Exelon and Entergy , have suffered the most over the past five years.

Although you'll get a great dividend yield from any of these utilities, you'll notice that one of the few differentiating factors is overall debt to equity. While all utilities are naturally expected to carry a significant amount of debt to build power plants, Exelon's debt load is much lower than the rest of its peers.

You'll also notice that the aforementioned Exelon and Entergy, which are more reliant on nuclear than its peers at Southern Co. and SCANA, are valued considerably cheaper on paper based on price to cash flow. From these stats alone, it's very difficult to ascertain a best-of-group, but I will say Exelon presents a compelling overall valuation based on these metrics.

What's next
Now for the real question: What's next for Exelon? That question is going to depend on whether the long-term costs for nuclear energy become more competitive with natural gas and if the U.S. government steps in to provide assistance to nuclear power providers.

Our very own CAPS community gives the company a highly coveted five-star rating, with a whopping 97.2% of members expecting it to outperform. Despite my contrarian tendencies, I wholeheartedly agree with the community on Exelon and have made a CAPScall of outperform on Exelon. I'm currently up 1 point on that call despite the fact that the stock is at a new low.

Exelon offers a lot of advantages to income-seeking and risk-averse investors. First, it offers a necessity product in electricity. Whether the U.S. economy is strong or struggling, energy demand will largely remain unchanged, which provides Exelon near-guaranteed cash flow. Second, it has a very stable dividend, which is one of the reasons I made it a selection as a great dividend to buy right now in April. Finally, its purchase of Constellation Energy will help reduce its dependence on nuclear power and give it more room to take advantage of all fuel sources, including low natural gas prices. In short, don't expect that CAPScall to be closed anytime soon.

If you love high dividend yields and are excited by the idea of building your nest egg by reinvesting your returns, than you'd like the inside scoop on three more companies that could help you retire rich through healthy dividends and future growth alike, then click here for access to our latest free special report.

Craving more input on Exelon? Start by adding it to your free and personalized watchlist. It's a free service from The Motley Fool to keep you up to date on the stocks you care about most.