Over the last 12 months the death of big box stores has become increasingly apparent. Giants like Best Buy , Wal-Mart , and Target have been scrambling to adapt to a new retail environment. But the big question for investors remains: Is it working?

Each of these companies used to rely on the convenience of a huge footprint for shoppers' perusal. Perusing used to lead to in-store sales, but it's now evolved into showrooming, a trend that ends with customers buying their goods with cheaper online retailers like Amazon.com.

The solution big boxes have settled on is one of smaller proportions -- literally. Target has introduced stores-within-its-stores as well as smaller store formats; Wal-Mart has experimented with Express-sized convenience stores, and Best Buy has embraced the success of smaller Best Buy Mobile stores.

Unfortunately for Best Buy, piggybacking on this trend doesn't address its particular problem: pricing. Target and Walmart are finding success because, in addition to the already low prices their brands can promise, they are now making the experience more enticing in their own ways.

And while a one-stop shop for unbiased mobile opinions is neat, it may not be enough. Just take a look at how the three companies have fared over the last year: 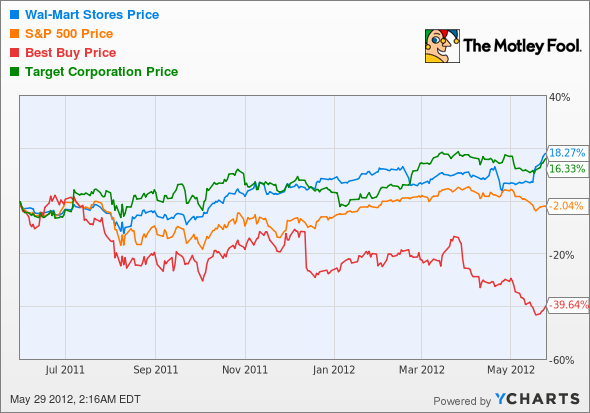 Both Walmart and Target are beating the market with substantial returns for investors, while Best Buy continues to lose. And with the company taking a hit to the margins with its recent $50 iPhone 4 promotions (while other providers stay at $99) it's obvious the company is struggling to build a more substantial customer base.

Meanwhile, within the first year of opening 10 test locations, Walmart says its Express stores have been profitable. The company is already moving forward with plans to build more to compliment its other iterations of grocery stores, superstores, and original Walmarts.

Similarly, Target recently reported a 11.5% year-over-year sales increase. Because of this, I'm going to jump on over to our CAPS community and give both companies a thumbs-up rating to beat the market. I think their futures look bright, as long as they can continue to innovate and adapt quickly.

Walmart and Target aren't the only retailers keeping things fresh, though. Some of our top analysts have found another one with a great future for the upcoming year and beyond. They've named it The Motley Fool's Top Stock for 2012 in a special free report. Click here read all the details you need to know now.