Shares of Arch Coal hit a 52-week low on Thursday. Let's take a look at how the company got there and see whether cloudy skies are still in the forecast.

How it got here
Coal used to be a great thing to have put in your stocking around Christmas time because of the United States' reliance on the black lump to generate about half of its energy. Nowadays, with natural gas prices near decade lows, no one wants to find the little black lump in their stocking.

Electric utilities are using these exceptionally low natural gas prices to take exorbitant one-time charges to shutter or renovate coal-powered electrical facilities to run on natural gas and are leaving coal companies with far too much supply and weakening demand. This is the plight that Arch Coal, and the entire sector, has suffered recently.

For Arch, specifically, the company reported a 19% increase in revenue in the first quarter, but it reversed a strong year-ago adjusted profit of $0.36 into an adjusted loss of $0.04. Even worse, the company readjusted its guidance lower based on what it described as "severe weakness in the U.S. thermal coal markets."

Arch hasn't shuttered any of its mines yet to curtail expenses, but it did reduce its quarterly dividend payout by 73% to just $0.03. That's in stark contrast to Patriot Coal , which is struggling to renegotiate the terms of its debt and has closed mines in order to conserve cash. Similarly, CONSOL Energy and Alpha Natural Resources have both closed mines, with CONSOL also reducing its weekly days of operation to just five in order to cut expenses.

How it stacks up
Let's see how Arch Coal stacks up next to its peers. 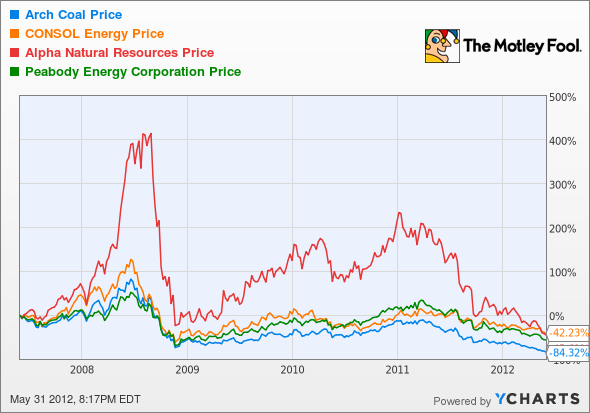 It has been an ugly couple of years for coal producers. Now let's dig deeper into their underlying financials.

Based on the above metrics, Peabody appears to be the best overall value given its large, diversified, business model and the fact that it has resisted the trend to close mines. That doesn't mean it isn't suffering or that it doesn't possess a risk from being highly levered, but it's still positioned better than its competitors.

CONSOL and Alpha Natural have done their best to contain costs by reducing production and closing mines, with the smaller Alpha Natural taking a bigger hit to its bottom line.

Both Alpha Natural and Arch Coal are trading well below their book value as the entire sector has seen earnings estimates fall rapidly. Despite axing its dividend by 73%, Arch and CONSOL essentially yield the same at 1.7%; however, CONSOL has significantly less debt-risk as is evidenced by the 85% to 114% debt-to-equity marker.

Overall, selling in the entire sector appears overdone but with estimates continuing to fall, these stocks could get even cheaper.

What's next
Now for the $64,000 question: What's next for Arch Coal? The answer is going to depend on whether demand and prices for its thermal coal picks up and if the company can prudently keep expenses under control while waiting for this transition to occur.

Our very own CAPS community gives the company a four-star rating (out of five), with 95.4% of members expecting it outperform. I've been bullish on Arch Coal for quite some time and have rode a CAPScall of outperform down 70 points now. But, consider me stubborn because I have no intention of closing that pick.

The sell-off in coal is simply overdone. Coal will continue to remain an integral part of energy generation in the United States for decades -- a switch to cleaner fuels isn't going to occur overnight. Cleaner burning fuel transitions also cost huge amounts of money -- money that electric utilities simply don't have or don't want to deploy right now. That doesn't mean we're not going to see certain utilities change a few facilities over to natural gas or other alternative fuel sources, but to think that coal is going away would be a foolish conclusion. While Arch's situation isn't ideal, it presents an incredible value at its current price and could easily be a double looking out five years. I'm strongly considering adding the stock to my personal portfolio and remain optimistic on coal in general over the long term.

If you love high dividend yields and are excited by the idea of building your nest egg by reinvesting your returns (and Arch Coal isn't your type of stock), then you'd like the inside scoop on three more companies that could help you retire rich through healthy dividends and future growth alike. Click here for access to our latest free special report.

Craving more input on Arch Coal? Start by adding it to your free and personalized watchlist. It's a free service from The Motley Fool to keep you up to date on the stocks you care about most.