Here's something you don't hear every day: Somebody is beating Apple in a game of digital-entertainment sales.

The identity of the Apple masher might be another shock, especially if you judge a company by its stock chart. I'm talking about Netflix , whose recent market performance compares this badly with Apple's: 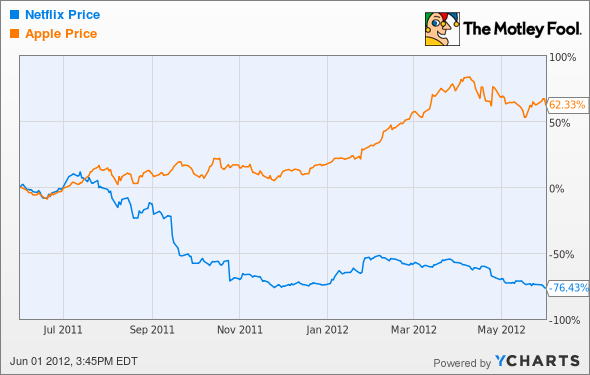 But it's true: Netflix passed Apple last year in a crucial market. According to the market watchers at IHS iSuppli, Netflix came out of nowhere to crush Apple's online movie revenues in America last year.

Apple's iTunes ruled supreme in this space up to 2010, when it controlled 61% of the market. At the time, Netflix did offer a streaming-only plan, but most customers chose to coast along with the free streaming component of their DVD mailer plans: The company's revenue share was a measly 0.5%.

All that changed in a hurry last summer. Netflix separated the streaming service from the DVD plan, forcing users to either pay about 60% more for the same dual-media experience or just pick one service over the other. Millions of angry customers left Netflix altogether, vowing to find a better deal from Apple or Amazon.com . But enough of them stayed with the streaming service to make it a revenue-producing powerhouse.

So in 2011, Netflix snagged 44% of all digital-movie revenues versus Apple's second-place finish at 32%. Amazon isn't even on the list, perhaps because those users are sticking with the freebie video service that comes with an Amazon Prime free-shipping subscription.

How did this happen?
It's an unusual position for Apple, but not very surprising. IHS analyst Dan Cryan explains that the Netflix model is what consumers want: "All the significant growth in revenue in the U.S. online movie business in 2011 was generated by rental business models, which provide temporary access, not permanent ownership," he noted in a statement. "Rental delivers unlimited consumption with a low monthly fee for older titles as well as cheap rentals of new releases, providing the kind of value that online consumers want."

Apple's model, where you pay per view or simply purchase the content you want, is popular with the studios because they get a bigger cut from each transaction. But that strategy is "stuck in the doldrums," Cryan says -- there's virtually no growth on that side of the fence. The lone exception is Wal-Mart -- yeah, I know -- whose pay-per-film service known as Vudu tripled its share of the iTunes-dominated transactional market. IHS points out that most of that growth came "at the expense of other providers, not Apple."

The gap between Netflix and Apple will grow even wider in 2012 because Netflix's new pricing plans affected only four months of the year. In 2012, it's wire-to-wire. Streaming sales will absolutely explode this year.

I doubt that Apple CEO Tim Cook is terribly annoyed about this state of affairs, though. Netflix has been a close ally of Apple over the years, often held up as a reason to buy the latest iPad or iPhone. And the two companies cater to very different corners of the entertainment market anyway: Apple wrangles new releases at a premium price while Netflix provides deep value but a less sparkly catalog (though exceptions confirm the rule, of course). It's not a zero-sum game, and you can have more than one winner in the digital video space. Our senior technology analyst thinks Apple has plenty of opportunity ahead of it, which he details in our new premium research report on Apple.

Digital video is revolutionizing how movies are made, distributed, and enjoyed. That's just one of many technology sea changes going on right now. In a special report penned by the Fool's finest analysts, you'll find the only stock you need to profit from the new technology revolution in Big Data and business intelligence. The report is totally free, but it won't be available much longer, so get your copy right away.