Shares of Dunkin' Brands hit a 52-week high this week. Let's take a look at how the company got there to find out whether clear skies remain on the horizon.

How it got here
If there's one thing Dunkin's been good at this summer, it's withstanding the bears. The stock has been setting new highs through 2012, while high-flying peer Starbucks turned lower after setting its own yearly high in April. Other coffee-and-pastry purveyors are likewise down from springtime highs, leaving Dunkin' as the only stock still making gains: 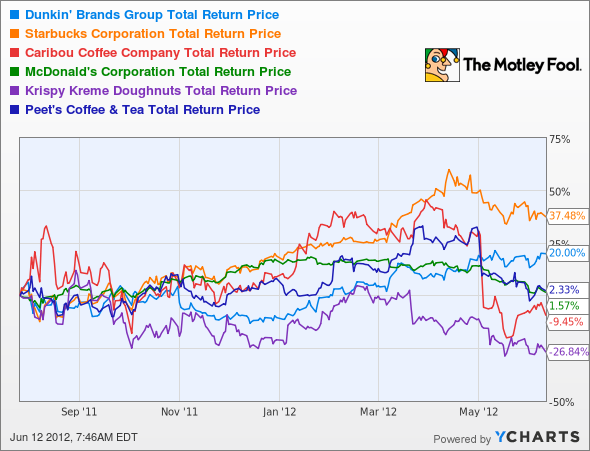 Recent Dunkin' news has been largely positive, including westward and southward American expansion efforts into Colorado and Alabama, as well as a major international push into India. The company plans to open as many as 450 international locations this year and 500 new stores in India by 2027. Granted, that target is far in the future, but investors seem to appreciate the ambition. Investors have even forgiven major insider selling, gobbling up a big block of post-lockup shares offered in March.

It's also worth noting that Dunkin' outdid glazed competitor Krispy Kreme with strong growth through 2011, and its Baskin-Robbins ice cream chain is actually outperforming its flagship donut purveyor in some regards. The company reported lower revenue, but higher earnings, in its most recent quarter. The first quarter is typically the weakest for Dunkin', so there's not much to worry about here. Dunkin's also expanded its partnership with Green Mountain Coffee Roasters , offering a wider variety of K-Cup flavors in its stores beginning this month.

What you need to know
Sure, Dunkin's been growing, but are its gains sustainable? At the moment, it sports both a higher valuation and a lower growth rate than most peers, save McDonald's , which isn't quite comparable due to its huge head start and major scale advantage:

It's hard to call Dunkin' cheap by any measure, and it's also worth noting that this onetime leveraged buyout is saddled with more debt than its peers. Investors were lukewarm to this high valuation and wary of the company's growth prospects after the company's IPO, the proceeds of which went mostly toward debt service rather than as a means of jolting expansion efforts. What changed this year? Beyond news of planned expansions, not a whole lot -- but growth is everything, and the company's forward P/E is projected at just 22.8.

What's next?
Where does Dunkin' Brands go from here? That will depend on the success of its expansion, but investors may also want to keep an eye out for economic shocks. Foreign growth (to say nothing of American growth) could turn negative if the countries Dunkin' expands to stall out. India's growth appears to be flagging, and European problems are well-known. There may not be any safe havens for high-priced restaurateurs in another downturn.

The Motley Fool's CAPS community definitely does not run on Dunkin', awarding the company a lowly one-star rating, with an unusually high 46% of CAPS players expecting the stock to underperform the market. I'm one of those players, but my bearish call hasn't proven true just yet. I'm not closing it out given the risks this company faces, so time will tell whether Dunkin' can keep making new highs and ruining my score, or if I and other bears come out ahead.

Interested in tracking this stock as it continues on its path? Add Dunkin' Brands to your Watchlist now for all the news we Fools can find, delivered to your inbox as it happens. Dunkin' might want to rule the world, but it'll have to get in line -- three American companies have already staked their future on international growth, and they won't give up their position without a fight. Find out more about these three American companies dominating the world in The Motley Fool's free report, available to our readers, at no cost, for a limited time.