Shares of TC Pipelines hit a 52-week low on Friday. Let's take a look at how it got there and see whether cloudy skies are still in the forecast.

How it got here
Since being profiled as a great dividend stock you can buy right now back in March, TC Pipelines, a master limited partnership which owns and operates 5,550 miles of natural gas transmission pipelines in the United States and Canada, has found a way to head even lower.

The main culprit pushing TC Pipelines lower is near-decade-low natural gas prices. Huge discoveries in recent years and record levels of supply coupled with a warmer-than-expected winter have acted like an anvil on the back of natural gas prices; low prices curb the supply of gas produced, shrinking the volume passed through the pipelines.

Some of the largest natural gas producers in the U.S. are beginning to take action, like Chesapeake Energy which announced last week that it was selling assets in order to reduce capital expenditures by $3 billion over the next three years. The hope would be that reduced output should reduce supply and help improve prices. That doesn't, however, account for future finds, like the one Apache announced on Friday which includes 48 trillion cubic feet of recoverable natural gas in British Columbia.

What TC Pipelines does have in its favor is the fact that it has increased its annual payout in 12 straight years and is able to produce healthy profits even with natural gas prices near record lows. In its latest quarter, TC Pipelines' acquisition of Gas Transmission Northwest and Bison pipelines from TransCanada in 2011 boosted its quarterly profit while its Great Lakes pipeline, though fully contracted through the summer, hindered earnings due to being contracted out at a lower rate than the year-ago period.

How it stacks up
Let's see how TC Pipelines stacks up next to its peers: 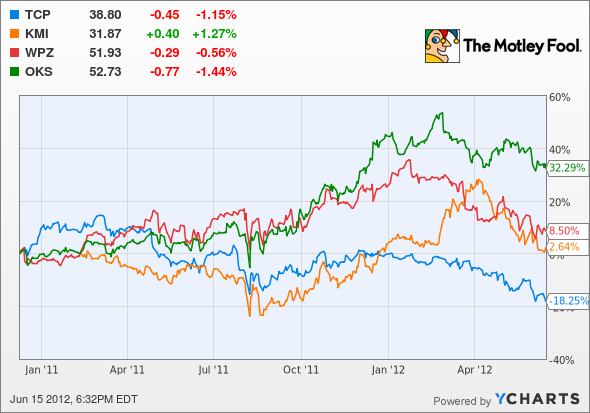 Despite trending similarly to its peers, TC Pipelines has nonetheless vastly underperformed other MLPs.

If this grouping looks familiar, that's because it's the same grouping I used in March when I took a closer look at TC Pipelines.

Nothing largely material has changed since then other than that book values have fallen a bit in accordance with low natural gas prices weighing on the individual MLPs while yields have bumped up marginally. Just as we saw last time, TC Pipelines is cheaper on a forward earnings basis and has historically paid out a higher yield than its peers.

Kinder Morgan and ONEOK Partners are pricier by these metrics, but that also doesn't make these significantly larger MLPs "poor quality" stocks by any means. I've profiled Kinder Morgan's CEO as a pro-shareholder leader before while ONEOK offers one of the most stable MLPs on the market. Their yields may not be up to par with TC Pipelines, but that doesn't make them any less attractive. They are just attractive for different reasons.

What's next
Now for the $64,000 question: What's next for TC Pipelines? That question is going to depend on whether or not natural gas prices rebound and if the company can improve contract rates at its Great Lakes transmission pipeline which have been a recent drag to profits.

Our very own CAPS community gives the company a four-star rating (out of five), with an overwhelming 92.6% of members expecting it to outperform. Although I have yet to make a CAPScall in either direction, I'm ready to anoint TC Pipelines with a rating of outperform.

MLPs have everything the investor in natural gas is looking for: The ability to invest in one of America's abundant, clean, future fuel sources while also collecting a dividend in the process. MLPs aren't without hiccups and price fluctuations as well as transmission pipe maintenance are serious issues that TC Pipelines' shareholders will likely deal with at some point. However, the company's premier dividend and strategically strong pipeline assets make it an incredibly compelling buy.

If the falling price of natural gas has you and your stocks down, then perhaps you should get your copy of our latest special report detailing three companies that could benefit from high-priced oil. This report is free for a limited time, so get your copy by clicking here.

Craving more input on TC Pipelines? Start by adding it to your free and personalized watchlist. It's a free service from The Motley Fool to keep you up to date on the stocks you care about most.