This article is part of our  Innovation in America  series, in which Foolish writers highlight examples of innovation going on today and what they see coming in the future.

The sequencing of the human genome was arguably one of the most important innovations for advancing drug development. Having the sequence of all the genes has accelerated the ability of researchers to identify drug targets and then design drugs that can inhibit or activate them.

And being able to sequence genomes to identify patients who will or will not respond to a medication is leading to a new era of personalized medicine. Pfizer's lung cancer drug Xalkori and Vertex Pharmaceuticals' cystic fibrosis drug Kalydeco wouldn't be possible without understanding the mutations in the genes involved.

And yet, I see little reason to invest in the genome sequencing industry. What's great for the end users isn't necessarily great for those producing the tools.

Plummeting costs
In January, Life Technologies announced that a $1,000 genome is within reach. That article has a nice picture of how far the price has dropped in the last decade; note that the price is on a log scale! Go look, I'll wait.

Illumina shattered the $1,000 mark last week, announcing that it'll sequence whole genomes for $9,500 or as low as $7,600 if you've got 50 or more samples. And it'll turn around the data for you in under two weeks.

The decreasing cost is great for researchers, but the competition has to put pressure on net profit and eventually profit margins.

It's certainly hindered upstarts. After IPO'ing in late 2010 and generating some excitement, Complete Genomics and Pacific Biosciences of California have been utter failures as investments. 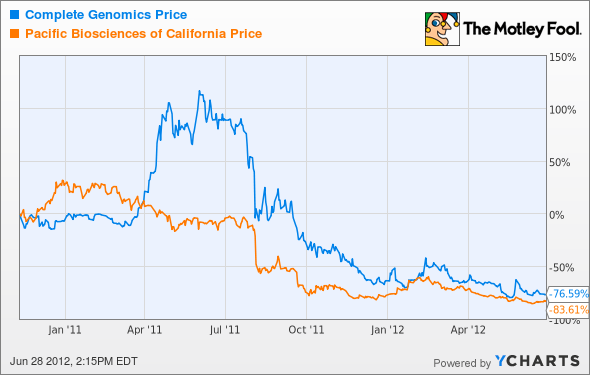 Like Life Tech and Illumina, Pac Bio develops machines that sequence genomes. Its technology might be superior, but that doesn't really matter in the race to the bottom on price.

Complete Genomics has taken a different approach, basically acting as a service company for researchers who want genomes sequenced but don't want to have to buy their own expensive sequencing machines. Illumina's moving into the sequencing service space seems to have squeezed Complete Genomics; the company recently cut staff and announced a plan to undergo a review of strategic alternatives.

Finite market
It's certainly possible to make money in low-margin businesses; just take a look at Costco or Wal-Mart. You just need to make it up in volume.

There's no doubt that there are a lot of genomes to be sequenced. At some price point, doctors will just routinely order a genome sequencing test for every patient they see.

But how often does your genome change? Pretty much only if you get cancer. So most people are only going to need one test in their entire lives, two if they're unlucky.

Yes, there are other applications for genome sequencing, identifying the exact bacteria in an infection, for instance. But most of those are one-and-done applications. Just as antibiotics tend to be low sellers compared to drugs that treat chronic conditions, genome sequencing will settle into a niche business after the impetus of initial sequencing.

Interested, just not at that price
Even with my gloomy outlook, it's still possible to make money with genome sequencing companies. The sure number of potential customers -- every man, woman, and child in the developed world -- means companies can make money on the ramp up.

Figuring out the value of the market is difficult, though, with the price plummeting so quickly. Roche was interested in purchasing Illumina, but only at a certain price, which I take as a sign that the health-care giant is conservative about the long-term potential of one of the world's best innovations.

Fool analysts believe they've found three disruptive technology stocks that are investable. You can find out what they are in the Fool's new free report "3 Stocks To Own For The New Industrial Revolution." Gain access for free by clicking here.

Read more about innovation today and its future in America; head back to the series intro for links to the entire series.