So far in 2012, Carnival Cruise Lines and its investors have dealt with highs and lows. In January, a tragic accident caused the stock's price to fall 15.8% in a single day, but it has slowly climbed its way back up and is now up 5% for 2012, but what can investors hope to see for the rest of the year? Let's take a look.

Gas prices are a big concern for the cruise industry. High oil prices can eat away at a company's profits in no time. Currently, only 38% of the company's fuel consumption for 2012 is hedged, which gives it a great opportunity to take advantage of the lower fuel prices we're seeing right now.

This unexpected turn could help make up for some of the losses the company has dealt with this year and gives them an edge over competitor Royal Caribbean Cruise Lines which had 55% of 2012's fuel consumption hedged, as of April 20.

While Carnival does expect net revenue to be down for 2012 compared to 2011, the company is already seeing a strong recovery from January's accident. Since March, fleetwide bookings excluding Costa are up 8% compared to the prior year, and booking volume for Costa is up more than 25% for the same period.

Unfortunately for the rest of 2012 advance bookings are trailing their prior-year comparison. While there is room for this to improve throughout the rest of the year, it's not a great start to the second half of 2012. Neither Carnival nor Royal Caribbean is beating the market so far, and it's unlikely they'll be able to for the rest of the year given the cruise industry's tough dynamics. 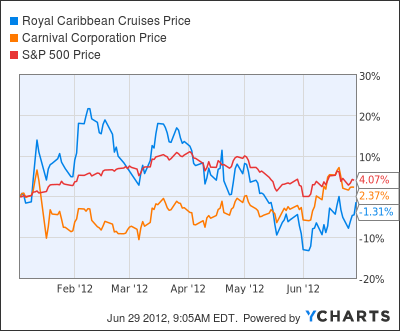 Beyond 2012, though, the cruise industry has great prospects. As more and more baby boomers enter retirement, they'll be looking for ways to relax and travel. Cruises offer just that at a variety of price points. Global tourism is another developing area where cruise companies are likely to benefit.

Carnival's P/E ratio, though, is a bit high for a company in such a strained industry right now, especially when you compare it to Royal Caribbean's 9.4. While the company has recovered admirably, it's probably not the best place for your money right now.

There are lots of great stocks that will help boost your portfolio this year, though. Carnival may not be one of them, but our analysts have found one that they not only think will provide great returns, but will end up being the top stock for 2012. They put everything you need to know in a free report -- all you need to do is click here to read it now.