Shares of Coinstar hit a 52-week high on Thursday. Let's look at how it got here and whether clear skies are ahead.

How it got here
Almost immediately after touching a 52-week high in April, the kiosk operator boosted first-quarter and full-year guidance, expecting consolidated revenue of $2.2 billion to $2.3 billion, with core diluted earnings per share expected at $4.40 to $4.80.

It went on to post a strong first quarter in line with its revised guidance. Sales came in at $568.2 million, again primarily driven by healthy growth in its Redbox segment, which grew 39% to $502.9 million, while its namesake Coinstar division inched up 5.6% to $64.8 million. For its efforts, net income popped significantly to $53.7 million, or $1.65 per share.

Just last month, the company announced a partnership with Starbucks' Seattle's Best Coffee division to begin selling coffee in thousands of kiosks around the country, starting at a buck per cup. Then Coinstar said it closed the previously announced acquisition of NCR's DVD kiosk business, further strengthening its position in the DVD kiosk market.

How it stacks up
Let's see how Coinstar stacks up with entertainment rivals, including online streamers as Coinstar prepares for its long-awaited streaming. 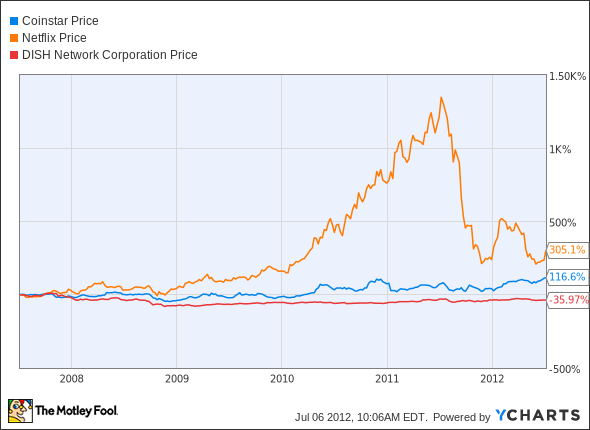 Let's include some fundamental metrics for more insight.

DISH and Coinstar have ambitions of challenging Netflix in online streaming, but Coinstar is doing just fine without it. Netflix has long since shifted focus away from its own DVD-by-mail business in order to focus on streaming, and Redbox is happy to step up to fill that need.

Retail is changing, and these companies are leading the way. Grab a copy of this free report to learn how two companies are disrupting retail as we know it. It's totally free.