Mobile devices are taking over the world. This digital frontier is being fueled by a growing demand for tablets of every shape and size. Apple , the most valuable company on the planet, may have popularized tablet devices, but it's no longer the lone ranger in the space. Let's take a closer look at today's leaders in mobile computing and see which stocks are likely to come out on top in the second half of 2012.

The remainder of the year is shaping up to be one of next-generation products. Word on the street that Apple plans to release a smaller version of its popular iPad emphasizes its push to better compete with cheaper devices such as Amazon.com's Kindle Fire and Barnes & Noble's Nook.

Mini-devices with massive appeal
The release of a 7-inch iPad mini at around $299 is still speculation at this point. However, the move would help Apple broaden its customer base, since many consumers can't afford to spend between $499 and $699 for the 10-inch version. In fact, analyst Gene Munster of Piper Jaffray estimates that a smaller form iPad would boost Apple's revenue in the fourth-quarter by around 1%. He also thinks the mini version could steal as much as 30% market share from Android-based tablets.

That's a bold assertion, considering Apple already claims 68% of the tablet market. If the rumors are true, the new iPad Mini will help Apple maintain its firm grip on the market. Still, Apple isn't the only one with next-generation products on the horizon.

Shiny and new
Amazon plans to launch an updated Kindle Fire before the holiday season this year. According to All Things D, the new model will feature a sharper resolution for improved viewing in addition to being a lighter and thinner version of its former self. Sounds great. But, I'm not sure it will be enough to safeguard against the possible arrival of a smaller, cheaper iPad.

True, at $199 apiece, Amazon's Fire would still be less expensive than the rumored $299 price tag of the iPad mini. However, I think people will be willing to pay an extra $100 for an iPad over a Kindle -- in part because of the way Apple markets the device as a multipurpose product rather than solely a media player or e-reader.

I suspect that with both Amazon and Apple releasing improved models of their popular devices, Barnes & Noble's Nook Color will be left in the dust. Meanwhile, two of technology's other biggest names, Google and Microsoft , have also entered the market with rival tablet products.

Crowding the market
Feeling left out, Google recently joined the party with its Nexus 7. The new Android-powered device is a duplicate of the Kindle Fire in terms of screen size and price. Microsoft is also building and selling its own integrated device. The software giant's new Surface PC tablet marks the company's official shift to include hardware.

The move is particularly important for Microsoft, as the company has struggled to gain a solid footing in the mobile market. Because of the strength of its Windows operating system, the fate of the Microsoft Surface is largely tied to pricing. If Microsoft can offer the device at a competitive price, the only other limiting factor would be its underdeveloped app ecosystem.

Apple, Google, and Amazon offer platforms with the strongest ecosystems of apps, developers, and content providers. Their respective tablets are the gateway drugs to their content universe. It's not surprising, then, that each of these companies employs an inherently different mobile strategy. Google, for example, is targeting ad sale growth with the launch of its Nexus 7 device.

Amazon, on the other hand, is selling its tablet at a loss and instead banking on sales of e-books, video streaming, and other content available for purchase in its online store. Apple takes a backwards approach by letting its app-packed iTunes Store pitch the hard sell, while still taking in a healthy profit margin on the sale of each current device as well. If Microsoft wants to give its Surface a fighting chance, it needs to beef up its content offerings.

Stocks to own
Apple will continue to be the tablet leader well into 2013, regardless of whether the iPad Mini rumors prove true. As an Amazon shareholder I'd like to say I'm confident in its ability to continue increasing its share of the tablet market. However, users can easily access their Amazon-bought content on rival devices like the iPad -- a lower-priced version could ultimately cause more customers to switch to Apple.

Now that we've seen how these companies' mobile strategies compare, let's take a look at the stocks. 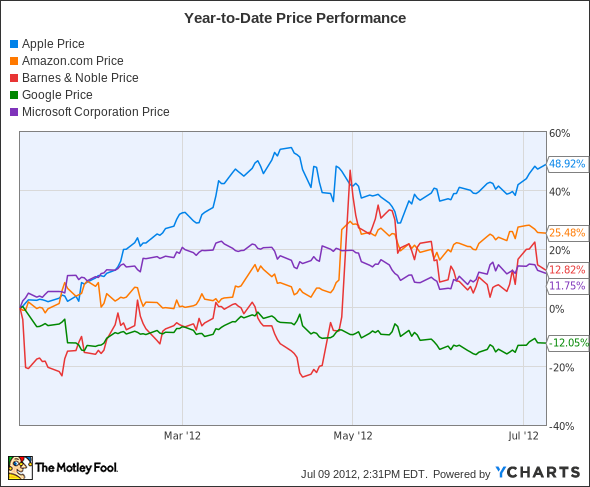 On a strictly P/E basis, Microsoft is the most compelling of the bunch, with a price-to-earnings ratio of 10. Of the group, though, shares of Apple are up the most year to date, with more than a 49% gain. I think both of these stocks are winning long-term bets. To see both sides of the Apple investment thesis, you can pick up a copy of the Fool's brand new premium research report on Apple.

But if you're looking for a way to cash in on the mobile revolution outside of the tablet makers, then I encourage you to read a special free report from The Motley Fool titled "The Next Trillion-Dollar Revolution." In it you'll discover one surprising stock that's profiting from disruption in the PC market. The report is free, but it won't be around forever, so get it now.