Will your favorite stock have its victory lap as we hit the homestretch, or will it get lapped? First-half performances can hold some clues, so let's look to the recent past to find out whether First Solar deserves a place in your portfolio going forward.

First-half recap
First Solar has been one of 2012's biggest flops. That's hardly unique in the solar industry, which is in the midst of a years-long slide, as you can see here: 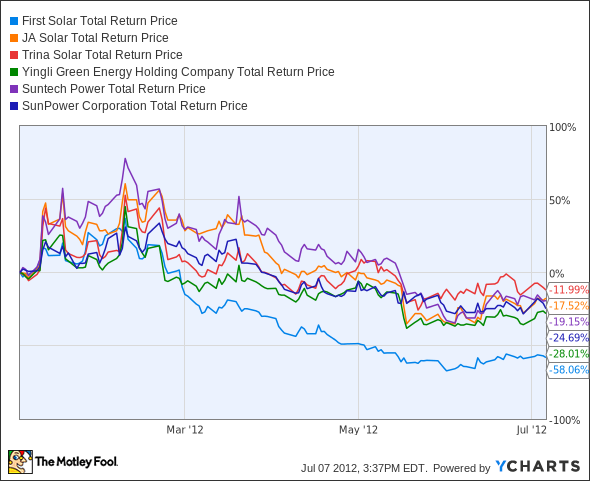 First Solar's fallen harder in 2012 than most peers, but it had further to fall in the first place. Even with a 50% haircut in 2012 it still possesses over twice the market cap of efficiency leader SunPower .

Source: Morningstar. NM = not material due to negative results.

What the numbers don't tell you
It hasn't been a good year for solar stocks, but there have been a few bright spots for First Solar. The company opened 2012 with a new efficiency record for its production-grade cadmium telluride (CdTe) modules. That 14.4% efficiency isn't quite as good as SunPower's, and may only manage to keep First Solar competitive with Chinese challengers JA Solar and Yingli Green Energy .

First Solar has also been the beneficiary of federal loan guarantees, which are helping it to install several utility-scale projects. It's arguable whether this is a good thing or a bad thing, but the guarantees have at least helped the company keep slogging along. First Solar had planned to close a German plant and idled four Malaysian production lines, which ought to help reduce the cost per watt of its panels as the company's manufacturing lines become more efficient.

Unfortunately, these bright spots couldn't outshine all the bad news First Solar's endured. Recent earnings have continued the company's miserable slide into a bucket of red ink, its once-unassailable leadership in costs per watt has been thoroughly assailed, and management has undergone all manner of shakeups. First Solar's CdTe technology is starting to look obsolete, which might reflect the growing warranty issues the company's endured.

Most of our Foolish analysts have turned against First Solar. Alyce Lomax dumped its shares from her real-money portfolio in April. I and my fellow Foolish contributors Travis Hoium and Sean Williams unanimously gave SunPower the nod over First Solar shortly afterward.

Travis, our resident solar Fool, later suggested that First Solar's assets be split into manufacturing and development arms. He went further several weeks ago, suggesting that General Electric ought to try acquiring First Solar's development business to bolster its own solar ambitions. To see how First Solar would fit into the GE picture, along with a detailed report on General Electric, check out The Motley Fool's new GE premium report.

First Solar faces a difficult battle for the rest of 2012. Competition remains fierce, solar technology is always progressing, and the combination of mounting legislative opposition to solar subsidies with a more dangerous economic downturn threatens to withdraw future funding from major projects. Can First Solar turn itself around? Its backlog should keep it afloat, but that may not be enough.