"I was there.
I've never been wrong.

I used to work in the record store.
I had everything before anyone ...

-- "Losing My Edge" by LCD Soundsystem

James Murphy's iconic lines might as well have been written by Nokia CEO Stephen Elop or Research In Motion chief Thorsten Heins -- a few years ago.

Like Murphy, they were there when the mobile industry was new, fresh, and exciting. And just like Murphy's persona in the song, Nokia and RIM lost their winning edge when the new kids arrived on the scene. Apple started the revolution with the first iPhone, and then Google piled on with its Android solution. These days, the former kings of the mobile hill are scrambling for lifelines, desperate to stay relevant and alive. The following chart illustrates the situation with a certain kind of grim authority: 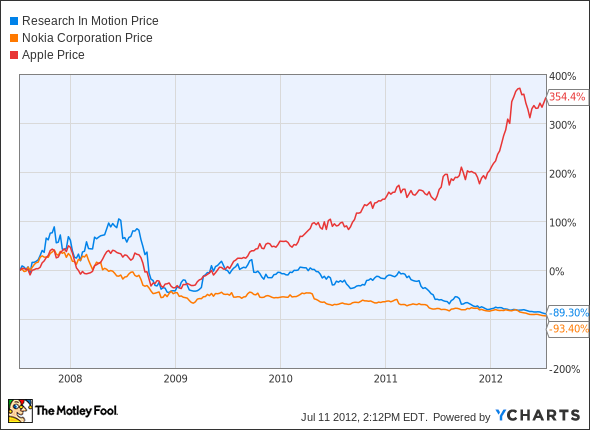 But what if one of these fallen giants works up the gumption to stage a comeback? The bounce back from today's rock-bottom state of desperation could pay off very handsomely for shareholders. So let's take a look at which turnaround looks more likely: RIM or Nokia.

RIM's knight in shining armor
For the Canadians, the turnaround hinges on one very specific play with no Plan B in sight. The BlackBerry 10 software update is supposed to revolutionize RIM from the bottom up.

Heins recently reinforced this point in a interview with CIO Magazine: "In January with the full touch device and the QWERTY coming, I think we will reinstall faith in RIM," he said. "You will see that this is a true mobile computing platform that allows BlackBerry to even explore other domains and spaces, like automotive, in cars."

In a separate Reuters sit-down, chief marketing officer Frank Boulben goes a few steps further. Delaying the BlackBerry 10 launch into the first quarter of 2013 is no big deal, he says, because "we will have much more attention and focus and ability to leverage our carriers." In fact, the platform will be so darn good that it basically markets itself by word of mouth: "The most natural thing to do from a marketing standpoint is to put that experience in the hands of our fans and let them do the marketing job, so to speak."

That's a lot of responsibility for software that RIM bought off Harman International Industries for just $200 million. Pull it off, and management will look like geniuses. Fail, and watch the unhappy hordes of shareholders gathering in Waterloo, Ontario, with torches and pitchforks.

Before weighing the odds of that binary outcome, let's have a look at the competition.

Are the Finns finished?
Nokia embarked on its own supposedly game-saving quest in 2011 by betting the farm on Microsoft's mobile platform. So far, that gambit does not look good.

The Finnish company's stock trades at 18-year lows, dating back to the company's very earliest days on the American stock market. That's because the Windows Phone-based Lumia series isn't selling in the torrential volumes Nokia needs. But unlike RIM, Nokia hasn't super-glued its cart to just one horse.

The Microsoft agreement wouldn't stop Nokia from trying its hand at selling Android phones, the fledgling Firefox platform, or -- if RIM surprises everyone by licensing its most prized asset to others -- even BlackBerry 10 handsets. The company also sits on a cash cushion of $6.4 billion (net of $6 billion in debt), which gives Nokia more wiggle room for new strategies than RIM's $2 billion net cash position.

Of course, Elop hasn't announced anything like another wholesale strategy change. Getting a whole new platform off the ground in terms of design, quality, marketing, and user acceptance would be a tall order even for Nokia's deep pockets to handle. But the door is ever so slightly ajar to try another play if the Microsoft idea doesn't work out.

Drum roll, please ...
First, both of these stocks are in the dumps for very good reason. By now, Apple and Google have the kind of head starts an Olympic runner would give to an arthritic turtle in a fairly handicapped race. And those front-runners are still loping across the track like cheetahs on steroids.

That said, nothing is impossible. I'd give both Nokia and RIM about a 20% chance to salvage something useful out of their favorite gambits. That would still be nothing more than a 10% market share -- a stay of execution while the company works up a better plan. But since the stocks are priced for abject failure, that should be enough to create a decent share-price pop. But the long-term stories are still murky, even if this happens.

And the tiebreaker comes from the risk each stock poses to your invested capital -- one could be a total loss in 12 months while the other should survive a bit longer.

If the BlackBerry 10 platform really is all its promoters have cracked it up to be, RIM would have a bigger upside than anything Nokia can whip up today. On the other hand, the unfortunate post-holiday introduction of said savior creates enormous risks that management seems to ignore.

So if everything plays out the way I expect it over the next year, Nokia will still muddle along in search of a workable strategy. RIM, on the other hand, will be sold for parts as the BB10 gamble fails. So I don't advise anyone to bet big on either of these turnaround bets, but Nokia gets the nod if you really must choose one. Your capital is just a smidgen safer in Finland.

Of course, you could just go with one of the companies eating these guys' lunch, Apple. In our brand-new premium research report on Apple, our top tech analyst provides everything investors need to know about Apple's opportunities and threats going forward. Better yet, it comes with a full year of updates, too.