What do you get when you cross a bride looking for a dress with a medical-waste disposal expert? Answer: a lot of money. The cable shows Say Yes to the Dress and Dirty Jobs make up a small part of a lineup that has resulted in big bucks over the past few years for media company Discovery Communications . Can the company extend its successful run to eight years and counting? Let's take a look.

Gold rush
Investors who bought shares in Discovery when it first traded in July 2005 and held on would now have profits totaling more than 220%. Even investors who were late to the gold rush of reality-based TV programming still did well. Discovery shares are up more than 20% this year.

How has the stock fared against competitors? Much better than an urban legend does on Mythbusters. 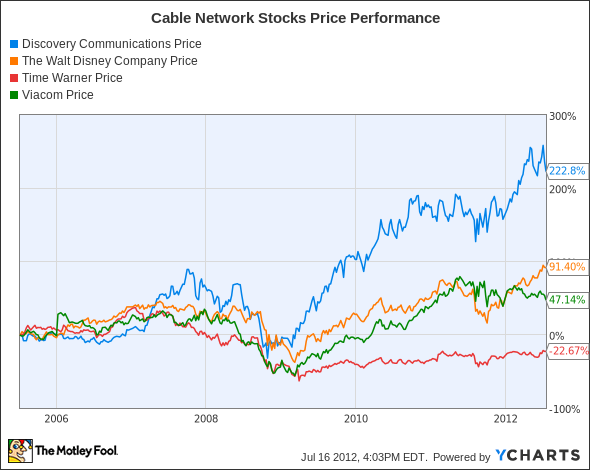 Shares of Disney , which owns a large stake in A&E Networks, have nearly doubled since 2005. Viacom is up nearly 50% during the same timeframe. The company owns multiple cable networks including CMT, MTV, and Spike. Time Warner , with its media empire including cable channels TBS, TNT, and TruTV, lags behind the others.

One potential reason for Discovery Communications' better performance is its focus on what the company calls "nonfiction media." Disney has movie studios and theme parks. Viacom owns Paramount Studios. Time Warner's networks range from Cartoon Network and CNN to HBO. Discovery, though, makes its money nearly exclusively from reality-based programming.

Shark week
Discovery Communications' popular Shark Week on the Discovery Channel shows fierce sharks that rule the waters. The company faces its own version of Shark Week every week with ratings battles. Advertising garnered nearly 44% of 2011 revenue. The rates Discovery charges for advertising hinge largely on the popularity of its programs, particularly with key demographic groups.

Distribution rates paid by cable and satellite TV operators and other content distributors are also affected by how popular the company's shows are. These distribution charges account for nearly 49% of revenue.

Judging from recent results, A&E Networks is winning the reality ratings wars with its popular History network shows Pawn Stars and Swamp People. Discovery Communications failed to place any programs in the top 25 cable TV shows for the past three weeks. In part because of its ratings weakness, Goldman Sachs recently downgraded Discovery Communications from neutral to sell.

Discovery is premiering several new shows this summer that could revitalize its brands. Then again, they could be like blood in the water for the sharks.

Deadliest catch?
Discovery and Harpo jointly launched OWN: Oprah Winfrey Network in 2011. It seemed like a great partnership at the time.

However, the young network has struggled to attach viewers. These difficulties have contributed to the financial woes. OWN has lost more than the $273 million that Discovery Communications initially committed.

Harpo has the right to require Discovery Communications to purchase all or part of its interest beginning in 2016. This means that Discovery could be on the hook if OWN flounders along for a few years before collapsing. Mounting losses could make OWN Discovery's deadliest catch ever.

However, Discovery has expressed confidence in OWN, with CEO David Zaslav stating that OWN may break even sometime in 2013. The company is also touting improving ratings for OWN.

What not to wear
Ratings challenges. Big losses with OWN. Is Discovery Communications one stock that investors should shun as much as some of the outfits on What Not to Wear? No, this stock appears be a reasonable buy candidate, in my view.

I think that Discovery's current bad news could easily change to good news with a few new hit shows. The company's Animal Planet, Discovery Channel, TLC, and other networks should continue to be mainstays on cable and satellite television. Most of its programming translates to other cultures well, so international growth prospects look pretty good. Oprah has at least a fighting chance of pulling OWN out of the ditch.

The stock trades at a forward price-to-earnings ratio of less than 15. This is on the low end of its P/E range over the past five years. My recommendation is to consider buying Discovery Communications. Reality actually looks pretty good.

What also looks pretty good is what some of the smartest investors in the world are doing these days. Check out The Motley Fool's special report "The Stocks Only the Smartest Investors Are Buying." Get your copy of this free report.