Shares of Alcoa hit a 52-week low on Monday. Let's take a look at how it got there and see if clear skies are still in the forecast.

How it got here
As goes China, so will go Alcoa. Although Alcoa supplies aluminum products to North America, Europe, and Asia, it has been China's rapid infrastructure expansion that's been the driving force behind much of the metal demand we've witnessed over the past decade.

China's second-quarter GDP figures came in slightly ahead of Premier Wen Jiabao's initial estimates and grew by 7.6%. While that may seem robust to us in the United States, where growth rates are more commonly around 3%, this represented China's slowest growth in more than three years and is well below its 30-year average growth rate of 10%. In addition to hampering Alcoa's growth, copper giant Freeport-McMoRan Copper & Gold shipped 100 million less pounds of copper last quarter because of the slowdown, and worries persist with Thompson Creek Metals , a big supplier of steel-strengthening alloy molybdenum as China's manufacturing sector continues to struggle.

By no means was Alcoa's latest quarter peaches n' cream, but it also wasn't the complete train wreck many had expected. On the bright side, Alcoa's reduced smelting capacity helped contain production and control expenses, which allowed it to produce an adjusted profit of $0.06 -- not too shabby considering aluminum prices fell 18% year over year -- and maintained its view that global aluminum demand would rise by 7%.

Challenges, of course, still remain. Weaker macroeconomic trends are straining aluminum demand and pricing, which, in turn, keeps putting off Alcoa's expansion plans. With its business so intricately tied to the economy and little resolution in sight in terms of Europe's debt woes, it could be a long while before Alcoa is back to being in great shape.

How it stacks up
Let's see how Alcoa stacks up next to its peers. 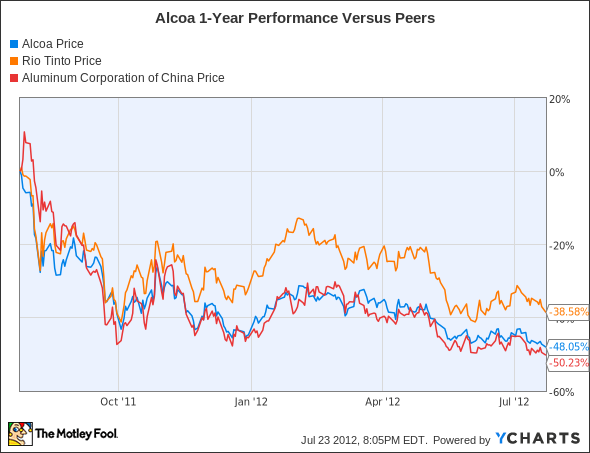 As you can see, the aluminum sector as a whole has had a terrible past year, with Rio Tinto leading the pack with a loss of 39% and Aluminum Corp. of China on the opposite end of the spectrum with a loss of 50% over the past year.

Macroeconomic weakness has hit the entire metals sector hard and is the primary reason so many companies are cheap -- at least based on book value.

Rio Tinto, just like when we compared these two in May, continues to be the most attractive company due to its diversity in minerals mined and its delectable 4% yield. It also doesn't hurt that it has the lowest forward P/E and debt-to-equity of this bunch.

Aluminum Corp. of China appears cheap based on book value, but it's veiled behind China's protective import laws and mired under a mountain of debt. With spending slowing domestically, it's having just as much trouble as Alcoa, except it's considerably pricier on a cash flow and forward earnings basis.

What's next
Now for the $64,000 question: What's next for Alcoa? That question depends on whether or not China can get its growth engine back on track, and if Alcoa can continue to reduce expenses and capacity in order to maintain profitability and stabilize global aluminum prices.

Our very own CAPS community gives the company a four-star rating (out of five), with a whopping 93.6% of members expecting it to outperform. You can count me among the optimists that have made a CAPScall of outperform on Alcoa, although that call is down a depressing 32 points at the moment.

After pointing out an endless sea of problems with Alcoa, you're probably confused as to why I have an outperform rating on the company in the first place. Frankly, that's because Alcoa is the best at what it does, it's a crucial component to furthering the industrialization of China, and when it does get around to expanding its operations, it will be considerably more efficient. It's truly the definition of a long-term play since Europe's woes won't be cured anytime soon, but it should work out well for investors with a long investment horizon.

Alcoa isn't the only American company that imprinting its name globally and utilizing its strengths to expand into emerging markets. Our team at Motley Fool Stock Advisor has identified three American companies that are set to dominate in the emerging markets, and they'd be happy to share them with you. Simply click here to gain free access to this latest special report.

Craving more input on Alcoa? Start by adding it to your free and personalized watchlist. It's a free service from The Motley Fool to keep you up to date on the stocks you care about most!

Is Alcoa About to Go on a Roll or Get Steamrolled? @themotleyfool #stocks $AA $FCX $RIO $TCPTF $ACH Next Article
Current