Three months ago, Level 3 Communications reported a decent first quarter. At the time, I told you to keep a lid on your enthusiasm for the stock because there were plenty of red flags hiding under the shiny veneer.

Today, Level 3's shares plunged 11% on disappointing second-quarter results. The stock has lost 29% of its value since that dire warning in early May. It's not always fun to be right.

Total revenue of $1.6 billion was just $1 million above the year-ago period. Level 3 managed to cut its bottom-line losses from $0.97 per share to $0.29 per share, but analysts were looking for an even smaller bucket of red ink.

The flat sales included 5% higher American revenues but also significant weakness in Europe and Latin America. In particular, orders from the U.K. government dwindled by 26% year over year.

But the worst warning sign on display here is the weak grip Level 3 has on its cash flows. In the second quarter, the company generated just $3 million of free cash flows, down from $19 million a year earlier. Neither figure is particularly impressive for a business with billion-dollar revenues, and it's a long-term trend that isn't going away: 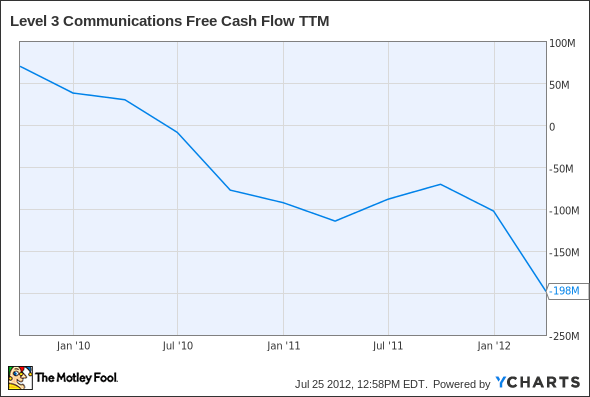 Mind you, that chart starts after the 2008 financial crisis. You'd expect a healthy service business to grow healthier as consumer, government, and enterprise spending ramp up in the aftermath of that crash, but Level 3 is doing the exact opposite. I still don't see any sign that management is up to the turnaround task at hand.

And for all of this execution risk, you don't even get a dividend bonus. AT&T and Verizon both combine Level 3-style networking scale with financial stability and decent dividend payouts. Or you can rely on CenturyLink and Windstream to pair even fatter yields with some growth potential.

Either way, I can't think of an investment thesis that would lead me to Level 3 today when there are so many better choices on the market. My bearish CAPScall on Level 3 soared today, and I expect more of the same in coming quarters.

To get started on a better telecom portfolio, learn more about AT&T's rock-solid cash flows and dividends in this free report, but hurry while it's still gratis.