If the business world were a Monopoly board, Pebblebrook Hotel Trust would have red hotels on all the best spots. This REIT capitalized on a woeful economy and lousy real estate market to cheaply buy swanky lodgings in and around oft-visited cities. Based on recent results, Pebblebrook's now laughing all the way to Park Place.

May we take your bags?
Chairman and CEO Jon Bortz has been strategically buying hotels for nearly 20 years. Since starting Pebblebrook in late 2009, he's invested more than $1 billion to snag 17 upscale hotels in popular cities nationwide, plus a 49% stake in six more hotels in New York City.

The company seeks properties where permits and land for new hotels are hard to come by. Pebblebrook lets other companies run its hotels, takes a generous cut, and distributes the lion's share as dividends.

Earnings as cozy as a fluffy bathrobe
Pebblebrook hasn't looked back since it turned its first profit in fiscal 2011. In its latest quarter, revenue grew 30% year over year to $59.6 million, outpacing the 25.6% increase in expenses.

That said, Pebblebrook bought six new hotels (plus its share of those NYC hotels) in fiscal 2011, and two more so far this year. How do we know that it's not relying on expansion -- instead of strong operations -- to grow its top and bottom lines?

In its latest annual report, Pebblebrook helpfully breaks out numbers for hotels acquired before 2011. Expenses for those properties grew 210% year over year, but revenue grew an even faster 221%. However narrowly, the company seems to be pumping up profits at its prior purchases.

A box of chocolates on the pillow
REIT investors depend on dividends, and for now, Pebblebrook yields a modest 2.1%. The company also periodically dilutes investors by issuing new shares to raise money. However, Pebblebrook seems to be using the new cash shrewdly and profitably. Its dizzying revenue, margin, and net income growth suggest that Pebblebrook's payouts could rise in the years ahead.

While it pays the lowest dividend, Pebblebrook also has some of the smallest debt, which gives it greater flexibility to make future purchases.

Only Chesapeake, with its much larger yield and similar price-to-book value, seems even more promising. However, Pebblebrook shares have thrashed Chesapeake's in the past year: 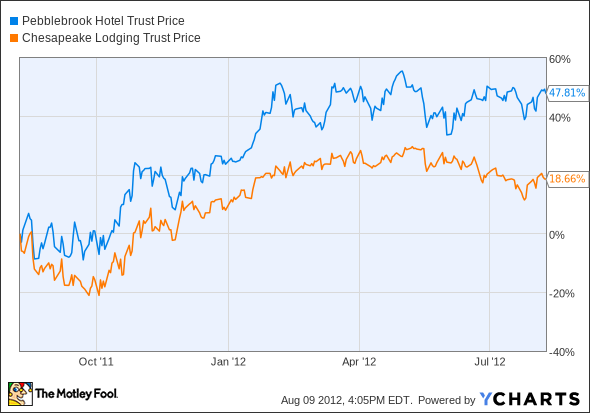 Fast growth, smart management, and efficient operations all make Pebblebrook an impressive-looking REIT. (I'm giving it a thumbs-up in Motley Fool CAPS.) Investing in hotels here could leave you with a lot more than Monopoly money to show for it.

If you like the look of Pebblebrook but need the security of a stronger payout, we've unearthed a set of rock-solid dividend stocks for you. Discover all nine of them when you click on over to our special free report.