All investors have to ask one question before they add a stock to their portfolio: "Is this a good buy today?" Well, today we'll take a closer look at one company that has many would-be investors asking this very important question. Let's see if SandRidge Energy is worth a place in your portfolio.

Tracking the trends
One way to find out how the market views SandRidge is to look at its stock performance as compared to its key metrics, like revenue, net income, and free cash flow. Is SandRidge's price responding to its earnings, or is there a discrepancy that we might be able to take advantage of? 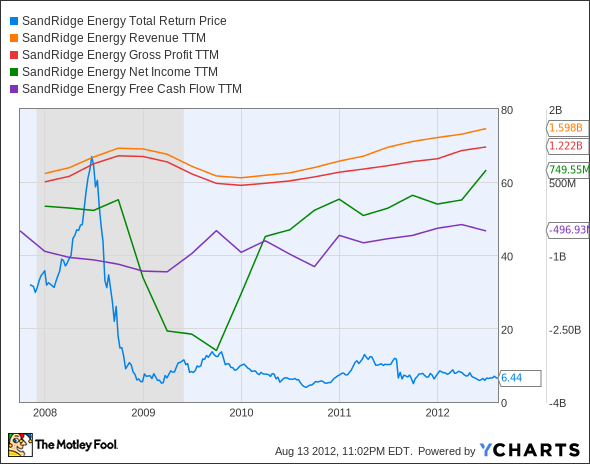 Net income has improved substantially after bottoming out in 2010, and has now outpaced the growth in SandRidge's revenue, but it looks like free cash flow has yet to turn positive. Is negative free cash flow the reason the market's been avoiding SandRidge for the past few years? Let's dig a little deeper.

Sources: Morningstar and YCharts. TTM = trailing-12-month. N/M = not material because of negative results throughout.

SandRidge has undergone a major turnaround over the past five years. Fool contributor Arjun Sreekumar has a great write-up on SandRidge's past and future, from its early days as a nat-gas-focused driller in Texas to its current incarnation as a fairly conventional oil exploration and production company. As a relatively young upstart, SandRidge has to spend copious amounts on capital expenditures, which explains both the consistently negative free cash flow and the steady growth of its debt.

That doesn't fully explain why its price has languished while its bottom line has grown. The market may not expect SandRidge to become a cash cow in the future, despite the strong improvement in net income. We'll find out if that's the case in just a moment.

Looking ahead
Now that we've gotten a look at SandRidge's past, let's see what its future might hold. We've got plenty of opinions from Wall Street, but it's also worth looking at The Motley Fool's CAPS rating of this company and its own anticipated guidance.

Here we have to stop and scratch our heads. Analysts expect triple-digit earnings growth going forward, but its stock has languished. Part of that can be blamed on SandRidge's dilutive offerings over the past five years, which have increased shares outstanding by nearly 350%: 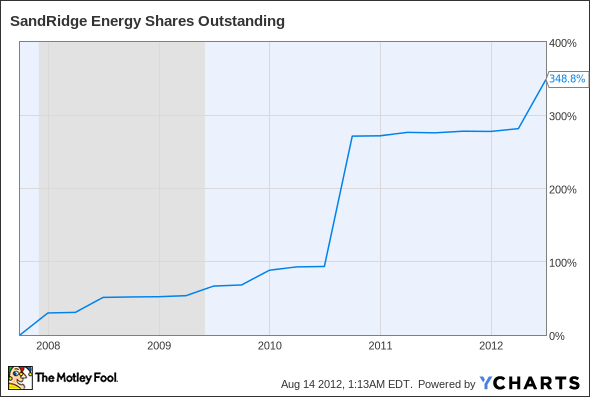 SandRidge has also been busy spinning off its assets into publicly held trusts in the last few years. That's helped fund its operations, but it's also kept its book and enterprise values from growing as it builds out operations. Chesapeake Energy , SandRidge's biggest neighbor in the Mississippi Lime region, has also spun off substantial assets into royalty trusts, but SandRidge's growth has led to better value retention, despite a worse share performance: 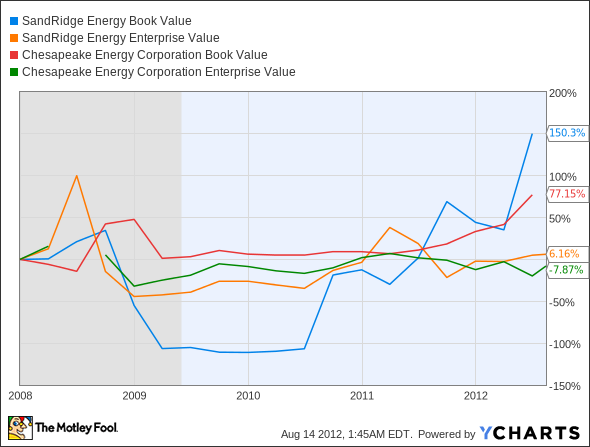 Putting it together
Today, SandRidge is focused on expanding its drilling efforts, and has set its sights on the two basins for which its trusts are named. The company also acquired a small shallow-water offshore driller earlier this year. It appears to have a bright future ahead in spite of its substantial debts, with more to come -- $1.6 billion in new senior notes were offered or announced just last week.

As long as earnings continue to grow rapidly, and no further share dilutions or royalty trusts are planned, that debt should be manageable. It's hard to see the price of oil dropping significantly as long as the rest of the world continues to industrialize. Still, those are big ifs. I wouldn't make SandRidge a portfolio cornerstone, but you might be ahead of a steeply rising curve if you decide to jump in now.

SandRidge has bet big on high oil prices, but there are many others that have done the same without taking on massive debts. The Fool has highlighted three in our most popular free report on the oil industry, which is still available for a limited time. Diversify your energy portfolio with these three top stocks -- click here to find out more, at no cost.