Shares of Wendy's hit a 52-week low today. Let's take a look at how it got there and see if cloudy skies are still in the forecast.

How it got here
Wendy's may be pitching its burgers as a square deal for investors in its new ad campaign, but many of Wendy's woes can be tied back to the round void that is its lack of innovation over the years.

The reason McDonald's is the premier fast-food chain is because it's been the leading innovator in the industry. McDonald's was the first to introduce healthier items to its menus, it was the first to realize that its restaurants needed a makeover, and it's even testing a new mobile payment system in 30 of its stores over in France using eBay's mobile payment system, PayPal. McDonald's has become synonymous with convenience and efficiency. McDonald's has such industrywide influence that Jack in the Box has essentially ridden its coattails to success by remodeling its own stores and revamping its menu with Burger King only now attempting to do the same thing in the United States.

Wendy's hasn't had any of those same successes. It's been trying to work its way into the breakfast business but hasn't seen enough positive financial feedback to roll out its breakfast program nationally as of yet. Under the image activation program, Wendy's has been successfully remodeling its stores and achieving better results, but at a clip of only about 50 remodels each year. Given that the company has 6,547 restaurants worldwide, at this rate it'll be the year 2142 before the remodels are complete.

Finally, Wendy's, and the entire sector for that matter, is dealing with rapidly rising food prices brought on by the worst drought in decades.

How it stacks up
Let's see how Wendy's stacks up next to its peers. 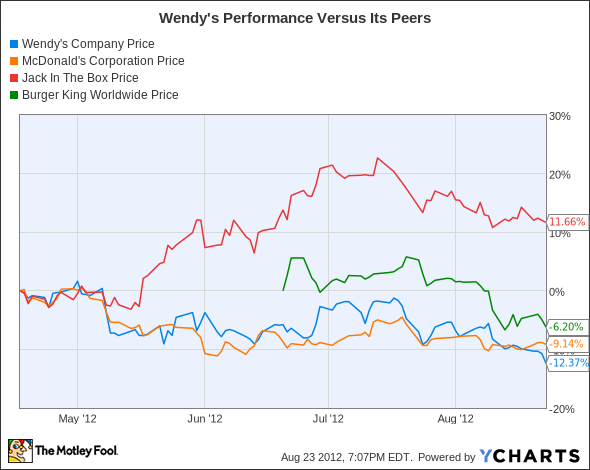 Burger King's recent IPO is skewing these charts to just a four-month reading, but make no mistake about it, McDonald's is the clear outperformer with Jack in the Box a distant second.

If my spiel above about why McDonald's is far superior to its fast-food peers wasn't convincing enough, then perhaps the fact that McDonald's net margin is quadruple that of its closest peer is enough to prove my point?

Wendy's did manage to unseat Burger King for the No. 2 spot in terms of total U.S. hamburger sales. However, its net margin of 0.3% and its large debt load leave a lot to be desired. Burger King might be brutally late to the game when it comes to adapting its menu, but it's still light years ahead of Wendy's, which is spending big on its new ad campaign and on store remodels to drive traffic.

Jack in the Box can also be lumped in the unoriginal camp, but it adapted to store and menu changes much quicker than Burger King. Jack in the Box's remodels have quickly invigorated sales in the company and have allowed it to be perfectly happy growing in McDonald's shadow.

What's next
Now for the $64,000 question: What's next for Wendy's? That question depends on how rapidly it can adapt its menu to changing consumer wants and needs, whether it can successfully return to profitability while also relieving itself of debt, and whether it can fend off rising food prices without scaring its customers away.

Our very own CAPS community gives the company a three-star rating (out of five), with 80.5% of members expecting it to outperform. Not to be a negative Nancy, but I've been pessimistic on Wendy's for quite some time and my CAPScall of underperform is currently up 34 points. Furthermore, I have no intentions of closing this pick anytime soon.

As far as I'm concerned, Wendy's has done very little to change my opinion that it's heading in the wrong direction. It did recently refinance some of its debt due in 2016 that bore a whopping interest rate of 10% and should save the company $25 million in interest annually, but it's made too few strides in regard to expanding its menu or attracting consumers to its restaurants. Much of its woes can be traced back to an ill-timed combination with Arby's in 2008, but with the two companies now separated for more than a year, it's time for Wendy's to perform or get out of the kitchen!

The great thing about Wendy's is it's an easy-to-understand business. That's one premise behind Peter Lynch's investment style and one of the main reasons our team of analysts at Motley Fool Stock Advisor have picked out three winners for us middle-class investors that aren't already sitting on Warren Buffett-type cash. Find out the identity of these three stocks for free by clicking here to get your copy of this latest special report.

Is Wendy's a Sizzling Buy or Is It Going Stale? @themotleyfool #stocks $WEN $MCD $EBAY $JACK Next Article
Current