Shares of Groupon took part in their weekly diving ritual yesterday, hitting another 52-week low while everyone was paying attention to a huge smartphone lawsuit. How low will Groupon's shares go before the company either manages to turn itself around or throws in the towel? Will its dot-com 2.0 flops-in-arms fare any better? Let's find out.

How it got here
Groupon's latest earnings were the catalyst for a steep drop in mid-August, making it by far the worst performer in a basket of formerly hot IPOs: 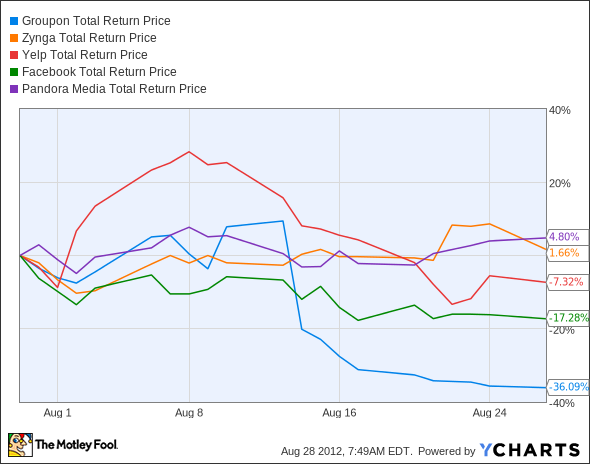 Over the past year, however, none of these stocks has remained undamaged. Some have fallen more than others, but the trend is unmistakable: 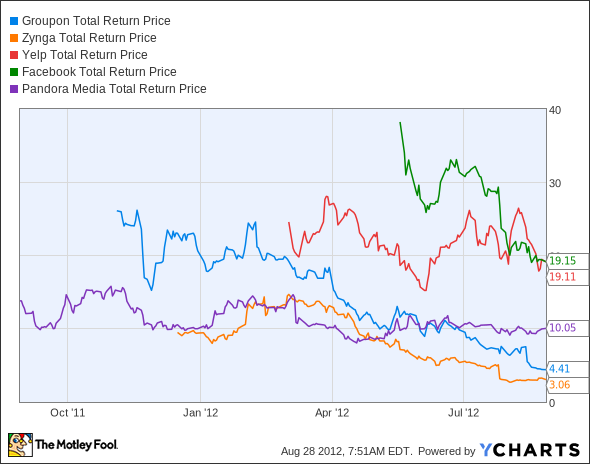 Groupon's been a consistent disappointment despite strong revenue growth. It's that pesky bottom line causing all the problems. Pandora , the longest-tenured stock on this list, faces a steep climb toward fully monetizing its streaming offerings. Facebook's been embroiled in a string of controversies since going public this May, from issues regarding the IPO itself to questions of leadership and long-term growth potential. It's also under pressure from expiring lock-ups, adding to the already-bloated bulk of shares being sold.

Zynga's under perhaps the most pressure of all, with executives jumping ship, competitors filing infringement suits, and one of the lowest monetization levels per user of any major public dot-com site. Groupon monetizes much better, but neither has done well converting that stream of income into profitability. Neither has Yelp , which has the lowest level of revenue per user of these five stocks by far. The company recently beat earnings expectations, but still came up short of profitability. Its shares have been quite volatile since its IPO, as investors try to figure out if it's worthwhile or just another flash in the pan. Groupon and Yelp can have contradictory effects on a small business' fortunes, as the burst of new customers from a Groupon offer often results in lowered Yelp ratings, which can have a long-term negative impact on consumer traffic.

Speaking of which, maybe we can drill down into a few of each company's key numbers, to figure out whether they really do have staying power over the long term or they've already got a foot in the grave.

What you need to know
Many of these companies have negative P/E ratios, so let's look at something a bit less susceptible to accounting gimmickry by comparing each on a price-to-free-cash-flow basis:

Sources: Yahoo! Finance and YCharts. NM = not material due to negative FCF.

Groupon is surprisingly cheap on this measure, especially against Facebook's inflated total and the negative free cash flow levels at Pandora and Yelp. Despite widespread pessimism, Groupon still sports a triple-digit forward growth rate, far higher than Zynga's or Facebook's. At this point, the few bullish Groupon holdouts qualify as extreme contrarians, as there's been a veritable stampede for the exits among the company's larger investors.

What's next?
Many bullish cases seem to expect a successful pivot away from Groupon's daily-deals model to something more sustainable. That's a nice dream, but the fact is that few companies successfully transition from one billion-dollar business model to another in the midst of extreme competition. You can probably name a few companies that have, but it's not a particularly long list. You could make the argument that all of these companies are being urged to pivot in a major way, and thus far the market doesn't think any of them can do so successfully.

The Motley Fool's CAPS community has given Groupon a one-star rating, with 85% of our CAPS players expecting the company to fall even further. That's one of the highest bearish ratios on all of CAPS, and it bodes poorly for market sentiment pulling this stock out of the gutter anytime soon.

It pays to find unloved stocks that could surprise the Street, and the Fool thinks Facebook might have a better chance at recovery than Groupon. That's why we've set up a premium research service covering the social network stock. You can get full access for a year to all the important news, data, and projections you need for a smarter buy, so get started today: Click here to find out more.