Shares of Questcor Pharmaceuticals (NASDAQ: QCOR) hit a 52-week low on Wednesday. Let's take a look at how it got there and see if clear skies are still in the forecast.

Disneyland has Mr. Toad’s Wild Ride, and Questcor shareholders now have their own version, although it's not nearly as fun.

Questcor has gone from being within a few dollars of a new 52-week high to a brand new 52-week low -- all in a matter of days. Questcor lost nearly half of its value last Tuesday following an announcement from Aetna (NYSE:AET) that it would no longer cover the multiple indications for Questcor's Acthar gel, save for one. At $23,000 per treatment, Acthar gel is extremely costly for health insurers like Aetna to cover, and fear spread quickly that other insurers may eventually follow suit. Questcor denied it would be a major problem, as Aetna's coverage accounted for just 5% of total sales.

However, that was just the beginning of Questcor's issues. Later that week, Questcor announced a probe by the U.S. government into the company's marketing practices -- specifically, the company's use of a $23,000 price tag on Acthar gel across all indications because of its status as an orphan drug that's without competition. As my Foolish colleague Keith Speights points out, probes into marketing practices wound up costing Johnson & Johnson (NYSE:JNJ) $2.2 billion and Amgen (NASDAQ:AMGN) $780 million for their deceptive practices. Questcor shareholders have every reason to be concerned.

How it stacks up
Let's see how Questcor stacks up next to one of its closer competitors, Pfizer (NYSE:PFE). 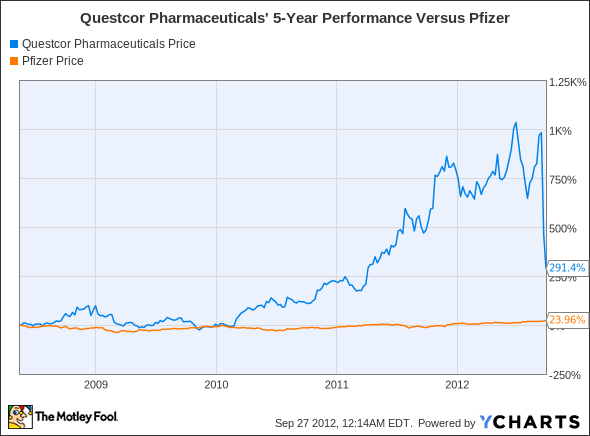 As you can see, even with the drop Questcor is vastly outperforming Pfizer.

You might think that Questcor is far and away the greatest value since sliced bread in the health care sector, but there's a lot that could derail its growth. If anything, an ongoing probe into its marketing practices from the U.S. government could result in fines and a huge reduction in the price of its leading drug, Acthar. There's also the vindication received from Andrew Luck, head of Citron Research, who questioned Questcor's marketing practices back in July.

Pfizer, on the other hand, won't offer nearly the same growth rate as Questcor, but has a broad spectrum portfolio -- including multiple sclerosis pain treatments -- and pays a sizable 3.5% yield.

What's next
Now for the $64,000 question: What's next for Questcor Pharmaceuticals? That question depends entirely on the results of the U.S. government's probe and whether other managed health care companies decide to drop coverage on Acthar similar to what Aetna has done.

Our very own CAPS community gives the company a two-star rating (out of five), with 89.4% of members expecting it to outperform. I’ve yet to make a CAPScall on Questcor, and given the uncertainty surrounding the company, I won’t be making one today, either.

There are simply too many unknown variables here to make a reasonable call in either direction. Questcor does have an FDA-approved orphan drug that's generally free from competition. On the flip side, it also has to contend with a federal probe and dropped managed-care coverage concerns. Until this situation sorts out, the best place to be is on the sidelines with Questcor on your watchlist.