The U.S. economy is slowly on the mend. Shaking off slowing growth in China and Europe's seemingly endless sovereign debt crisis, U.S. unemployment rates are at a 44-month low, homebuilding sentiment is at a six-year high, and U.S. GDP growth advanced at a modest 1.3% in the second quarter.

Yet, there's a good chance that if you ask middle-class Americans how they're personally doing, chances are you'll get an earful of negativity. Of the 1,287 middle-class individuals recently polled by Pew Research, an overwhelming 85% of them claimed that it was more difficult to maintain their standard of living now than it was 10 years ago.

Why the discrepancy? I feel it can be best explained in five key points.

As U.S. businesses have become more efficient and productive over the past few decades, the amount of corporate profits streaming to the middle-class worker has been steadily on the decline. According to the 2012 Organisation for Economic Co-operation and Development Employment Outlook, the U.S. labor share (defined as corporate profits going to pay wages, salaries, and benefits) fell an adjusted 450 basis points in just the past 20 years with top income earners excluded.

The reasoning here is simple: Middle-class America isn't being paid enough for what it's bringing to the table. Nominal wages have risen 201.5% since Jan. 1980, but inflation-adjusted wages since then are up a measly 1.39%.Â With the middle-class worker barely able to keep up with inflation, it's no wonder he or she feels poor.

This is almost cause-and-effect with point one, but poor real wage growth hasn't allowed the middle class to put away nearly enough of its hard-earned money. 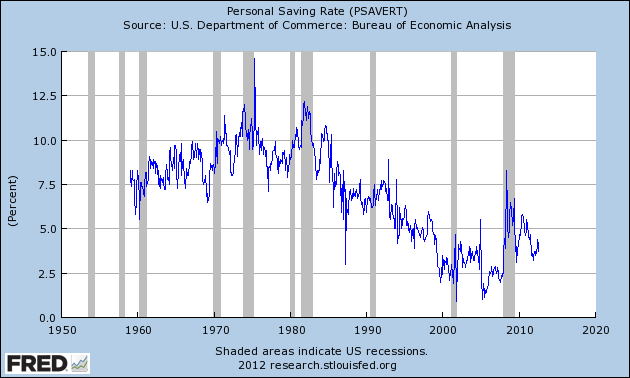 As you can see from the chart above, personal saving rates really began their decline in 1980, which perfectly coincides with the OECD's argument that labor's share of corporate profits is rapidly declining. My Foolish colleague Morgan Housel also closely examined middle-class saving rates in June and, pulling data from the Federal Reserve, pointed out just how little families have been able to save. In 2001, 61.3% of all middle-class families were able to put money aside the year prior; by 2010, that figure had fallen to just 49.8%. Although these savings rates do tend to pop during recessionary times as fear rises and spending tapers off, those pops are almost always temporary and lead to little meaningful long-term saving.

Point three: Labor participation rates are at a 31-year low.

Perception is reality; and the reality of the matter is that unemployment rates have remained so precipitously high for such an extended period of time that Americans are literally dropping out of the labor force in accelerating numbers.

Some of these labor force dropouts are benign (e.g., people retiring or going back to college), but it still points to the grim reality that the middle-class worker is finding it tougher to remain positive and find a job that will effectively utilize his or her skill set.

Furthermore, the average duration of unemployment has ballooned within the past four years from 18.7 weeks to a near record-high 39.8 weeks.Â Personally, I'm discouraged just thinking about that fact.

Point four: Middle-class homeowners were crushed by the housing bubble.

Another key point of the aforementioned Pew Research study is that median net worth for the middle class fell by a whopping 28% over the past decade, to $93,000 from $129,000. One of the primary reasons for completely wiping out two decades of wealth accumulation: the downturn in the housing market.

Perhaps no class was more overzealous when it came to investing in and levering their wealth against their home more than the middle class. As of July, 22.4% of homeowners were underwater on their mortgage, with an even more disturbing 48% under the age of 40 currently owing more than their home is worth. With little to no equity in their homes to fall back on, many middle-class homeowners are just crossing their fingers and hoping their homes will eventually go up in value. That's not exactly a plan for success and is yet another reason why the middle class feels poor.

Point five: The income gap between the rich and the middle class continues to grow.

Perhaps nothing will make the middle class feel poorer than watching the rich get richer. While median net worth for the middle-class dropped by 28% following a decade filled with two nasty recessions, the median net worth of the upper-tier actually rose by 1% based on Pew Research's study.

According to a report in The New York Times from March, 93% of the income generated in 2010 ($288 billion) went to the top 1% of earners, producing an 11.6% rise in their 2010 income over the previous year. As for the remaining 99% -- middle-class included -- income for the average worker increased by just $80 over the previous year.

With basically no wage growth, no avenues to meaningful saving, discouraging employment opportunities, a black hole in the housing sector, and the rich getting richer, it's very easy to see why middle-income America is feeling so poor these days.

Even our analysts at Stock Advisor understand the unique struggles middle-class investors are going through. That's why they've geared their latest special report highlighting three middle-class millionaire-making stocks toward those investors. Click here to get your free copy of this report and find out which three stocks could lead middle America to untold riches.