Many have tried. None have succeeded. Dozens of "iPad killers" have come and gone, with none of them remotely coming to close to murdering Apple's (NASDAQ:AAPL) flagship tablet. That's not for a lack of trying, and the trying ain't about to stop. Microsoft (NASDAQ:MSFT) is taking a shot with Surface, but its strategy is already full of holes.

Mobile platform archenemy Google (NASDAQ:GOOGL) has just unveiled a new Nexus 10 tablet built by hardware arch-frenemy Samsung. While I won't go as far as to call the Nexus 10 an "iPad killer," the device does look like it could be the first real credible threat to iPad domination in recent memory.

Can the Nexus 10 give the iPad a run for its money?

Beating Apple at its own game

If there's three things that rank right at the top of Apple's priority list, it's being the "thinnest and lightest [insert iDevice name here] we've ever made" combined with featuring "the highest-resolution display we've ever made." With that in mind, it may be quite painful for Apple to learn that the Nexus 10 is thinner, lighter, and has a higher-resolution display than the fourth-generation iPad -- and undercuts its price points by $100. 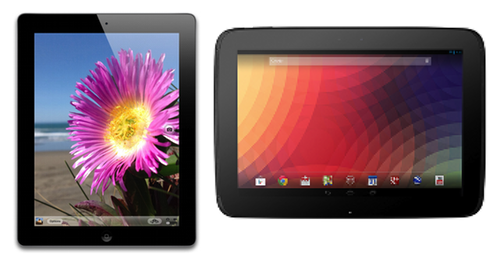 However, as obsessed as Apple is with build quality, Samsung is equally obsessed with plastic. The Nexus 10's thin design is made possible in part by using the material, but the display certainly has Apple beat on the spec front.

History has shown that competing on specs and price alone haven't been sufficient for competitors to see success. Microsoft didn't get that memo, though, since it's starting at the same $499 entry-level price point. Instead, the market has voted that it places high value on content availability, so spec battles don't paint the full picture.

Content is king
Google continues to hope its army of Android developers will get with the program and optimize their apps for larger tablet displays. Thus far, most of its apps are scaled up versions of its phone apps, since Android has a built-in method for scaling and resizing apps for larger canvases, in part to help mitigate resolution fragmentation within the platform.

Interestingly, Apple's initial decision to make scaled-up phone apps look absolutely terrible (by literally just enlarging them as is) turned out to be the best incentive for developers to optimize their apps for tablet form factors. It also didn't hurt that the iPad was commanding higher unit volumes, ensuring a larger audience for developers. As a result, Apple likes to boast that it has over 275,000 iPad-optimized apps in its repository now, and it takes every opportunity it can to point out the weaknesses of Android's scaled offerings.

It's more likely to kill other Androids
Nexus 10 isn't going to kill the iPad anytime soon, although it will inevitably win over some sales. I think the new tablet will certainly beat Microsoft Surface this holiday quarter, and it will undoubtedly be among the best-selling Android tablets.

That's not a hard hurdle to clear since most Android tablets have underperformed, and the Nexus 10 will probably kill more Androids than iPads.