At the beginning of 2012, I set out to form The World's Greatest Growth Portfolio.  Though I can't promise it will always live up to its moniker, the portfolio has returned 22% in just 10 months, besting the S&P 500 by about 9 percentage points.

A few weeks ago, I outlined  exactly how I would go about building my portfolio for next year: Invest first and foremost in companies that demonstrate exceptional levels of innovation, with special emphasis given to those that I believe will be around decades from now.

Today, I'm going to take a deep dive into one of my core stocks -- Intuitive Surgical (NASDAQ:ISRG) -- evaluate how I think the company is doing, and tell you why it might get less of an allocation this year. Read all the way to the end and I'll offer up access to a special premium report on another hot stock in Intuitive's field.

Not too much to complain about

For those who might not be familiar with the company, Intuitive Surgical makes the da Vinci Surgical Robot. You might see some hospitals advertising on TV that they have the machine these days. The machines make for less invasive procedures that usually require less recovery time.

The two procedures for which da Vinci is most utilized are hysterectomies and prostatectomies. However, there's a good chance that the machine will expand into other procedures where it offers similar or better results, with less invasiveness. Specifically, doctors are already experimenting with the use of da Vinci in nephrectomy, sacrocolpopexy, myomectomy and endometriosis resection.

With those kinds of possibilities, I think Intuitive is at the cutting edge of innovation in its field. And the stock has treated me, as I first bought shares back in October of 2010. 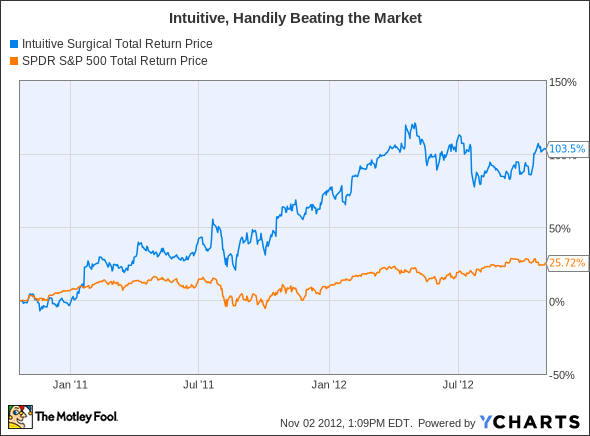 So far this year, the company has shown revenue growth of 24.5%, with net income growth of 40%. Both of those numbers are nothing to sneeze at, and help explain why I have so much admiration for the company.

Could this be a warning sign?
But as excited and proud as I am to be a part-owner of Intuitive, I've been given reason for pause this year when it comes to medical companies. You see, I'm not what you'd call a medical expert. Truth be told, the doctors usually have to set up a crash cart when I give blood, as I'm almost guaranteed to pass out.

While I've benefited from Intuitive so far this year, I was reminded of my ignorance in the field earlier this year by another one of my holdings: MAKO Surgical (NASDAQ:MAKO.DL). The company's RIO system allows for partial knee and hip replacements that have better alignment than traditional methods. Given the fact that today's aging boomers seem like they want to stay active into their later years, I thought the company was a slam dunk.

Alas, things haven't played out as I'd hoped. The company has suffered two big dips this year, and sits 65% lower today than it was at back in mid-March. At the heart of the matter is that orders for the company's RIO systems have dove off a cliff. It could be that the company is simply moving from early adopters to an early majority, or it could simply be that the medical community doesn't think the product adds enough value to buy it.

This lesson has helped me evaluate other burgeoning medical stocks like Accuray  (NASDAQ:ARAY) and MannKind (NASDAQ:MNKD) with a far more cautious eye than I would have in the past, and have greater appreciation for more boring stalwarts in my portfolio like Johnson & Johnson (NYSE:JNJ).

Which brings us back to Intuitive. During the most recent earnings report, CEO Dr. Gary Guthart said that prostatectomies were lower than the company expected because of "conservative PSA [Prostate Specific Antigen] screening protocols and a change in treatment recommendations for low-risk cancer patients away from definitive treatment."

To my untrained ear, that sounds like something that at least deserves some attention. The medical community needs to make recommendations based on what's best for patients -- as it should. If those recommendations start to preclude the use of da Vinci, that could be a cause for concern.

By no means am I thinking of throwing Intuitive out of next year's portfolio altogether, but I'm considering paring its allocation. Last year, it was a Core selection, getting 11% of my portfolio's cash. I defined Core holdings as "highly innovative companies that will almost certainly be leading their industry in 10 years."

Though I don't doubt that the company will be around in 10 years, I'm starting to wonder if it will still be in the same position it's in now. Given that, I'm strongly considering making it a Tier One company, which gets a smaller 7.5% allocation.

If, however, you'd like to further investigate MAKO, we have what you're looking for.