After a massive sell-off in shares this fall, a lot of questions have arisen around the ultimate opportunity that Questcor Pharmaceuticals (NASDAQ: QCOR) shares present to investors. Is this one-trick-pony trotting to an inevitable demise, or does its complex manufacturing process and orphan drug status give it a solid defense from competition for years to come?

In my new premium report on Questcor, I outline the story behind the stock in more detail. Below is a short excerpt from the report. I hope you enjoy it.

The opportunity
In 2007, company management embarked on a simple yet effective new strategy for the company: raising prices for Acthar Gel. The drug was being used off-label to treat a rare disorder called West Syndrome (also known as infantile spasms), but wasn't being priced in line with other drugs targeting rare diseases. In an effort to make Acthar "economically viable on a stand-alone basis," the company raised the average price for a vial of the drug from about $2,000 to nearly $30,000. While shipment volumes declined, quarterly revenues surged from $4 million to $27 million within six months, driving the company to become consistently profitable.

Now approved for 19 different indications, Acthar Gel's commercial success is primarily tied to three conditions. However, as the chart below indicates, multiple sclerosis has been the source of much of the company's recent growth. 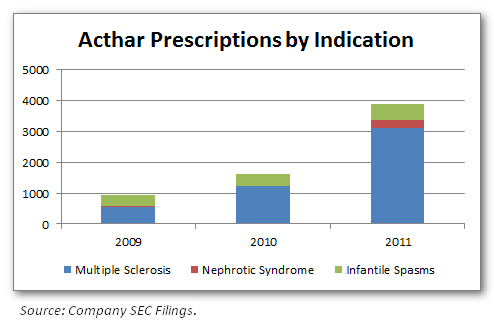 Primary indications
While there is still no cure for MS, Acthar can be used to help patients affected by the debilitating disease to get over acute exacerbations more quickly. According to the National Multiple Sclerosis Society, more than 400,000 Americans have MS, with 200 new diagnoses occurring each week. Patient numbers like that represent a huge addressable market for Questcor. But widespread use isn't required for Acthar to be a huge success. With prices still in excess of $20,000 per vial, even relatively small inroads into this market have allowed Questcor to grow at a considerable rate.

Learn more
I hope you enjoyed this sneak peek at our brand-new premium research report on Questcor. To learn about Acthar's other key indications -- as well as an in-depth view of the company, multiple reasons to buy and sell the stock, and a full year of analyst updates -- claim a copy today by clicking here now.