Shares of Hewlett-Packard (NYSE:HPQ) hit a 52-week low on Tuesday. Let's look at how it got here and whether more downside is in store.

The PC market remains in the dumps, which is holding back the likes of HP and its PC rivals. Microsoft (NASDAQ:MSFT) just launched Windows 8, which PC players hope will spark an upgrade cycle that they can ride for the next couple years. The new operating system has only been out for a couple of weeks, so it's too early to tell if this push will work or not.

Just last month, Moody's (NYSE: MCO) said it was contemplating downgrading HP's intermediate-term credit rating. The rating agency is looking for the PC maker to bolster profitability and cash flow while it tries to cut costs. Any rating change could affect the $31 billion in debt securities. CFO Cathie Lesjak has said she wants to get HP to a "mid-single A credit rating."

HP's turnaround is still MIA and investors are starting to lose patience.

How it stacks up
Let's see how HP compares to its peers and PC partners. 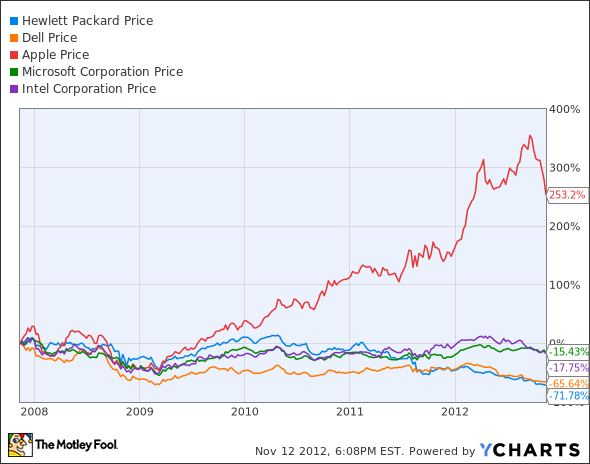 We'll include some additional fundamental figures from the trailing 12 months.

Primary domestic rival Dell is in a similarly precarious position, except it didn't just eat a giant $10.8 billion write-off like HP did. Dell's been acquiring numerous companies lately as well, and if those purchases don't pan out, it may see some impairments. Apple continues to do well due to its differentiated software packed into elegantly designed hardware. Intel is also seeing softness tied to the broader PC market, which is holding back its chip sales.

What's next?
For HP, 2012 can't be over soon enough. CEO Meg Whitman has said that 2013 will be a pivotal year for the company and its turnaround efforts. Windows 8 will give HP some exposure to the tablet market, and the company is already working on a smartphone, though not much has been disclosed about the device yet. Until then, HP has few upside catalysts.