There's no faster way to turn a friend into a frenemy than to directly compete with your old pal. With Microsoft's (MSFT -0.37%) foray into first-party tablets (with other devices on the way), the software giant's frenemy list is bound to get longer before it gets shorter.

If the old saying goes, "Keep your friends close and your enemies closer," what proximity do frenemies occupy?

Calling it your job don't make it right, Boss
Depending on whom you ask, Hewlett-Packard (HPQ -3.04%) is either the No. 1 or No. 2 PC maker in the world by unit shipments. What's not up for debate is that HP still ships a ton of PCs each quarter, which means it has quite a lot to lose as tablet cannibalization continues to take hold.

Microsoft's new Surface RT that just launched is the first embodiment of Microsoft's competition with its PC partners. This is the version that runs an NVIDIA (NVDA 1.10%) Tegra 3 processor, while the Surface Pro version with Intel (INTC -0.80%) inside is due out in January. HP's top PC honcho Todd Bradley recently sat down for an interview with IDG Enterprise's CITEworld, and he's not afraid of Surface RT:

I'd hardly call Surface competition. One, very limited distribution. It tends to be slow and a little kludgey as you use it .... It's expensive. Holistically, the press has made a bigger deal out of Surface than what the world has chosen to believe.

That "limited distribution" is one reason why Steve Ballmer recently said the tablet is off to a "modest start," since it's only available from Microsoft's online store and a handful of Microsoft retail stores. The "slow and a little kludgey" comment probably refers to the underwhelming performance of the device's software and interface, despite having solid hardware.

Kick a buck
Starting at $499, Surface RT is competing with Apple's (AAPL -2.46%) iPad directly on price, which many a fallen iFoe will attest is a tough proposition. On the surface, Surface appears to offer more storage at the same entry-level price point (32 GB instead of the iPad's 16 GB), but that's before you realize that half of that is immediately gobbled up by the operating system and other built-in apps.

It's common for gadgets to have a little less formatted space available than advertised, but we're usually not talking about half as much (on the 32 GB model). Microsoft is even being sued for false advertising over it.

Don't strike me blind for another couple of minutes
Instead, HP is focusing its efforts first and foremost on the enterprise tablet sector, figuring the consumer tablet market continues to be dominated by the iPad and its time is better spent catering to businesses.

We're not entering the consumer tablet fray any time soon. We'll be doing something next year, but you won't see a consumer tablet from HP before Christmas. You'll see convertibles that are focused on how you use the device, keyboard, clamshell.

That's a bet that the bring-your-own-device trend, also lovingly referred to as the consumerization of IT, won't take over the enterprise first. In the meantime, HP is focusing on its Elite Pad that's also due out in January 2013 -- the same time as Microsoft's Surface 8 Pro. 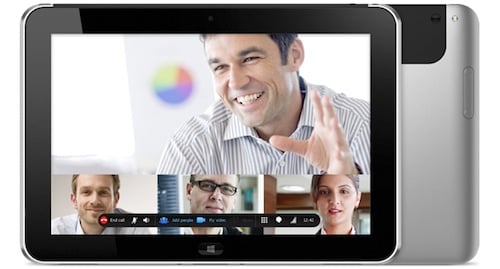 On this front, HP and Microsoft will be competing directly in the enterprise tablet space, since both the Elite Pad and Surface Pro will run Intel chips and are geared toward backwards compatibility with legacy applications. Even if HP's not afraid of the Surface RT because it targets a different market segment, it has more reason to be afraid of the Surface Pro.

What we've got here is a failure to communicate
Bradley also said the company continues to work on getting past the "confidence problems that [we] created with our customers," referring to the high-profile identity crisis that ex-CEO Leo Apotheker put the company through just over a year ago.

HP is now focusing on communication and execution to reassure its customers that it's still committed to the PC market.

Sometimes nothin' can be a really cool hand
When it comes to smartphones, HP keeps going back and forth. Not only did CEO Meg Whitman say HP wouldn't get back into smartphones last year only to recently confirm the company was working on one, but now Bradley says that HP's smartphone strategy is basically still up in the air.

Sooner or later, HP is going to need to do something in smartphones; it's a trend too big to ignore.

HP is spreading itself too thin and being too ambitious. The company wants to succeed in enterprise software, PCs, tablets, printers, and eventually smartphones at the risk of not doing well in any of those markets. In this case, nothin' ain't a cool hand.