Just last week, there were rumors that Apple (NASDAQ:AAPL) might see delays in shipping its freshly unveiled iMacs. A dubious French site, MacBidouille, relatively unknown in the world of Apple rumor sites, said that the new redesigned all-in-one desktops may be pushed back until next year.

That would be beyond the currently quoted November/December time frame, and difficulties were supposedly linked to challenges with the new friction-stir welding manufacturing process used. With all Mac desktops comprising less than 4% of trailing-12-month sales, any delays the iMac might have seen would have had a modest impact on financial results.

Fortunately, the reputable 9to5Mac rumor mill is now shooting down the talk of iMac delays, saying the 21.5-inch models are still on track for November and the larger 27-inch models are still slated to ship in December. The iMac maker has reportedly already begun shipping the smaller desktop to various distribution hubs around the world in preparation of its rollout. But even once the new iMacs launch, they're still expected to be constrained in "significant way," according to CEO Tim Cook on the last conference call.

Desktops are quickly falling out of favor as consumers continue to prefer laptops or mobile gadgets. Dell (Nasdaq: DELL) recently reported earnings with desktops revenue (23% of total revenue) falling 8% over the prior year, closely tracking the 8% decline in the broader PC market. Hewlett-Packard (NYSE: HPQ) similarly reported a 6% drop in desktop units in August, but its notebook unit performance fared even worse by plunging 12%. 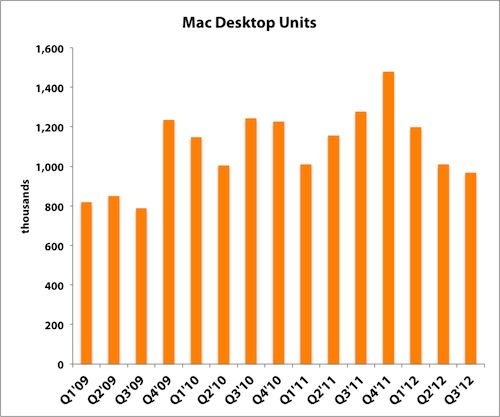 Apple's desktop shipments aren't immune either, falling 24% last quarter to 968,000. Even though desktops are a tiny and shrinking portion of Apple's business, the company continues to push the envelope in its designs. Most companies would follow traditional resource allocation procedures, but instead Apple just wants to make the best products. Dilemma solved.