For businesses, it pays to be big. There are lots of benefits to having huge scale. For one, earnings volatility is less of a worry for industry leaders. Their diverse revenue streams throw off profits that tend to flow at a predictable pace, quarter after quarter. For another, these companies have mature businesses with strong brands, and so they tend to pay steady -- and generous -- dividends.

But venturing a little beyond the popular megacaps can bring outsized rewards to income-seeking investors. And you don't have to sacrifice much of what's great about investing in the big players. For example, here are three attractive dividends from successful mid-cap companies.

Dr Pepper Snapple (NYSE:DPS) – 3.1%
Dr Pepper boasts a diverse portfolio of drink brands, including 7 Up and Sunkist, in addition to the flagship namesakes Dr Pepper and Snapple. The company clocks in at just $9 billion in market cap, but it packs a bigger income punch than $170 billion leader Coca-Cola (NYSE:KO) and its 2.8% yield. While they compete in the same industry, Dr Pepper is different type of investment. For example, the company collects nearly all of its revenue from the U.S. market, while Coca-Cola moves just 20% of its volume domestically.

Dr Pepper's recent earnings weren't exactly fizzy. In fact, the company's own headline from its Q3 press release admitted that net sales for the quarter were "flat." But that's par for the course in the beverage market these days, as Coca-Cola managed only a 1% bump in revenues on the quarter. Still, Dr Pepper saw its gross profit margin rise to 59% in the quarter, at just a hair below Coca-Cola's. 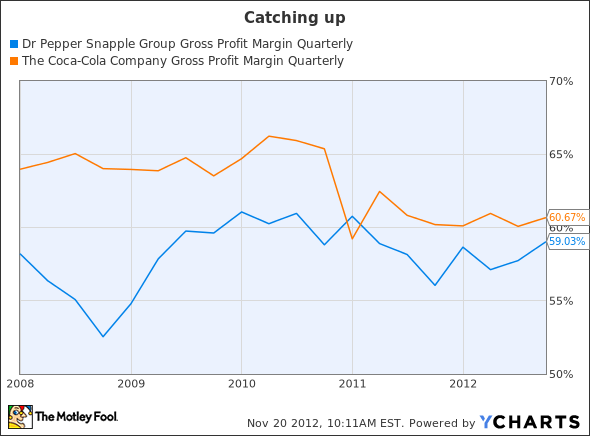 Despite that closing gap, Dr Pepper makes a cheaper investment right now. The company is valued at a P/E of just 15, compared with Coca-Cola's bubbly 19.

Molson Coors (NYSE:TAP) – 3.2%
If you're looking for something with a bit more bite, consider spiking your portfolio with $7 billion mid-cap Molson Coors. As the second largest beer company in the U.S., it's a top-shelf alternative to $140 billion conglomerate Anheuser-Busch InBev (NYSE:BUD). That's especially true at a time when InBev's 1.8% yield looks so ... watered down.

Molson has traditionally been focused on the North American market but just closed the books on a big acquisition that will give the company a strong footprint in central Europe. Domestically, Molson markets the supremely popular Coors Light and Miller Light brands and services about 29% of the U.S. beer market. That's compared with InBev's dominant 48% market share. But investors have to pay up for market-leading positions like that, as InBev sells for 18 times earnings while little Molson can be snapped up at a P/E of just 13.

Clorox (NYSE:CLX) – 3.5%
Or you might be able to clean up with a stock like Clorox. Few companies have more dependable revenue streams than the ones that produce consumer staples. This sector is dominated by $180 billion Procter & Gamble (NYSE:PG), which also boasts a hefty dividend yield over 3%, but the company has been stuck in neutral lately after issuing a few profit warnings earlier in the year.

Smaller $10 billion rival Clorox is in a brighter spot. Clorox just reported better sales and profits in Q3 and confirmed its outlook for the next year that predicts more growth in both areas. The company saw its gross margin jump to 42% in Q3 as cost cuts and price increases combined to boost profitability. Clorox has a long climb before it can hit P&G's stellar 50% profit margin. Yet things are trending in the right direction for the cleaning and household supplies maker. And best of all, Clorox is selling for cheaper than its dominant rival. Shares are trading at 18 times earnings, versus about 19 for P&G.

Bottom line
If I had to choose just one of these little guys, I'd go with Dr Pepper Snapple -- and not just because I drink way too much Diet Dr Pepper in a given week. The company's hefty yield makes it an attractive dividend investment. And its strong profitability is evidence of pricing power that's comparable with the best in the business. With shares valued at just 1.5 times sales and 15 times earnings, Dr Pepper looks downright cheap. The company might be small compared with Coca-Cola or PepsiCo, but the investment potential is anything but.