In these times of paltry interest rates, it's a challenge for any financial company to make a buck. This is particularly true for discount brokerages, which traditionally have roped in clients with the magic lasso of low trading fees. The name discounter that's struggled to most to succeed in this regard is E*TRADE (NASDAQ:ETFC), which, given its habit of posting deep losses, has been a takeover candidate for many years now. Even though the company said last year it wouldn't pursue a sell-off, its stock is pretty cheap these days, so the timing might just be right for a potential buyer to start hunting it.

Out of the black, and into the red
Like death and taxes, for a while it seemed to be a certainty that E*TRADE would lose money every year. The company posted an annual net loss so consistently, it was almost stunning when that number went black in fiscal 2011 (albeit at a modest level of $157 million). It wasn't some freaky accounting quirk, either; operating profit was also above water.

The past four quarters have been hit-and-miss, though. Q3 was fairly bleak, with a $17 million year-over-year dip in net revenue to $490 million. Notable drops were also recorded in other key metrics, like commissions and net interest income. And, naturally, bottom line. The number next to the minus sign was $28.6 million, in stark contrast to the positive $70.7 million of Q3 2011.

The company isn't entirely to blame for these slumps. It's swimming in the same frigid waters as every other discounter. Trading is relatively light as investors continue to bite their nails about the financial cliff that's looming ever closer and a European market that refuses to get back on its feet.

Even TD AMERITRADE Holding (NASDAQ:AMTD), more or less the best-liked stock in the sector, also had a quarter it'd rather forget. That company's net cratered 13% to $143 million, while revenue stumbled by 8% to $647 million.  Charles Schwab (NYSE:SCHW) managed to grow its revenue in its most recent quarter, but barely; its $1.2 billion in top line was only 1% higher than the same period a year ago. Net grew an admirable 12%, but this wasn't due to trading; revenue from that activity dropped by 17% on an annual basis.

Standing alone is for suckers
These days, investors seem to be interested in brokerages only if they're attached to big, sprawling financials such as Bank of America (NYSE:BAC) or JPMorgan Chase that have either had strong quarters (in the case of Morgan) or made improvements in their overall credit quality and non-core businesses (B of A). Over the past three months, the stock prices of such concerns have well outpaced those of the discounters. 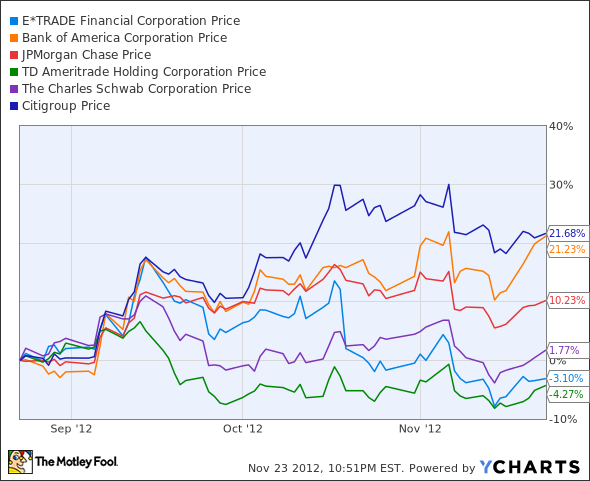 What also hurts E*TRADE is that it's not keeping pace with its peer group in certain critical respects. TD AMERITRADE is well aware that its segment is not the flavor of the month (or even the year), so it's dangling a fatter payout to tempt investors. Following its announcement of its most recent lackluster quarterly results, the company boosted its quarterly dividend by 50% to $0.09 per share, for a respectable yield of 2.3%.

E*TRADE pays no dividend at all and doesn't look likely to anytime in the future.

Schwab didn't add any pennies to its dividend, but then again it has less of a need to. Out of the three publicly traded discounters, it's probably the one best hedged against trading slumps. It managed a slight quarterly revenue and healthy net gain, helped in no small measure by a boost in its client list for -- yes -- banking services, despite flat-lining daily average revenue trades, a critical statistic in the brokerage industry.

Gored and ignored
Recent happenings at E*TRADE haven't been positive for the company, instead making it look clumsy and a little lost. The company reportedly interviewed an experienced candidate to fill in for interim CEO Frank Petrilli, but that candidate was Thomas Joyce, current CEO of accident-prone market maker Knight Capital (NYSE: KCG). Knight's stock promptly rose, probably on the possibility that it would be rid of the guy, while E*TRADE's took a hit for the same reason.

So now the latter's stock lingers in the $8 range, very close to its five-year low. That price puts the market cap at around $2.3 billion. Contrast that with the company that's long been the odds-on favorite to swallow it, TD AMERITRADE, with a market cap of $8.7 billion and a little over $5 billion in cash, against $1.3 billion in long-term debt. Meanwhile, Schwab's market value is around $17 billion, and it has nearly as much in cash, versus a mere $1.8 billion in long-term debt. Theoretically, either company could make a strong bid for its rival without too heavy a sacrifice.

No one's in a mood to trade up the shares of a brokerage these days, which is why grabbing E*TRADE could be an intriguing and cheap contrarian play. The discounter has shown some life in its results over the past year despite a rocky business environment, and its more than 4.5 million customer accounts would be a nice addition to the client rolls of its rivals.

The company hasn't moved from its insistence that it isn't for sale, but a sharp and hungry competitor might force the issue. After all, it's a tempting time to buy when the market's ignoring your potential acquisition.