Depending on where you live, you may have noticed something: Gas prices have been falling for the last few weeks.

By quite a bit, too. The nationwide average price of gas was $3.82 a gallon in September, according to the Energy Information Agency. It's now $3.36. That's a penny less than it was a year ago at this time. Adjust for nominal wages, and gas is measurably cheaper than it was a year ago -- a rarity in the last decade.

This is good news. Americans consume 344 million gallons of gas every day. With average prices down $0.45 in the last two months, the savings annualizes to $56 billion per year, or something close to $400 per household, per year. It's real money, and we can take all the help we can get right now. Oil prices are down about $10 per barrel since August. One study from the Energy Information Agency concluded that a $20 rise in oil prices cuts GDP growth by 0.4 percentage points and pushes unemployment up by 0.1 percentage points. A fall in oil prices of the same magnitude could boost the economy by a similar amount (although lower oil prices can be a symptom of weaker economic growth, so it's more of an offset than a boost). 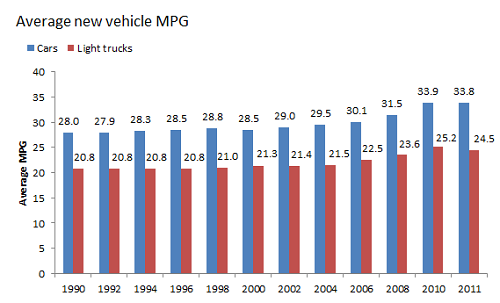 Gas prices are up about 11% since 2006, after adjusting for average wage growth. But the average gas mileage of a new car since then is up 12%. So for many, the net real financial burden of gas prices is about flat over the last six years.

Plus, other energy prices, particularly natural gas, have plunged over the last few years. Five years ago, natural gas traded for around $7 per million BTU. That spiked to almost $13 in 2008. It's now $3.31. Last winter, the average home heating bill was $204 lower than it was in the average five years prior, according to the Energy Information Administration.

Earlier this year, during a time gasoline prices were rising, an S&P report noted: "While consumers are definitely paying more at the pump, many consumers are benefiting from the lowest winter heating bills in years due to the combination of natural gas prices and the exceptionally mild winter in the northeastern U.S." It's expected to be colder this winter, so that could change. But the decline in natural gas prices shouldn't be ignored.

Here's a real-world example: Two weeks ago, CenterPoint Energy (NYSE:CNP) announced it was adjusting rates for Arkansas customers' natural gas bills. "This means a bill that was $100.15 last November will be $91.58 next month," it wrote. "With natural gas prices much lower than last year, our customers will save even more on heating their home and water this winter."

The most complete way of looking at this stuff is as total energy consumption -- including gasoline, heating, electric utilities, etc. -- as a percentage of all household spending: 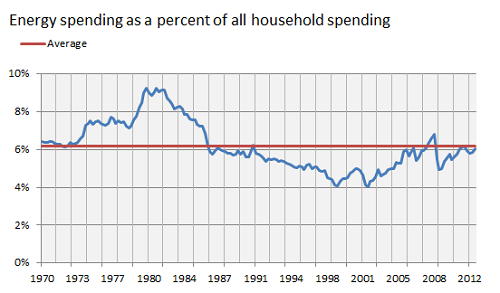 We're just below the 40-year average. And this chart doesn't even include the recent fall in gasoline prices.

The U.S. is in the early stages of a domestic energy boom. The International Energy Agency just put out a report predicting the U.S. will become the world's largest oil producer before 2020, overtaking Saudi Arabia. The rise is incredibly important for the U.S. economy, and will benefit companies like ExxonMobil (NYSE:XOM) and Chevron (NYSE:CVX). But since oil is traded on international markets, don't expect drastically lower prices. If you're interested in for some intriguing energy plays, check out The Motley Fool's "3 Stocks for $100 Oil." You can access this special report by clicking here.