This morning's four U.S. economic releases were positive for stocks.

Durable-goods orders remained roughly unchanged from September to October, growing from $216.9 billion to $216.94 billion. That's still better than the 0.4% drop analysts were expecting. New orders for durable goods spiked in July and then plummeted in August as large orders for jetliners were placed with Boeing after the Paris air show. Last month's 9.9% growth was simply the durable-goods orders returning to a more normal level. This month, if you exclude transportation, new orders increased 1.5%. 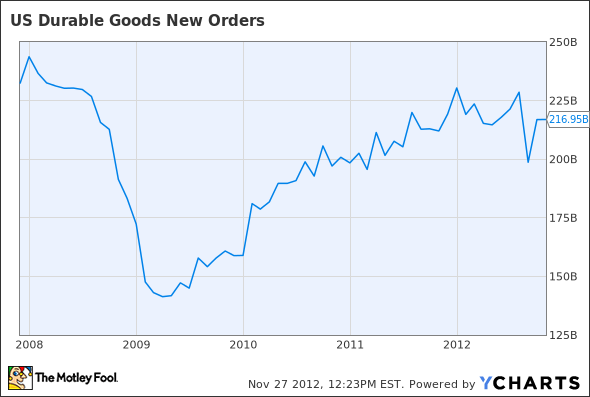 The Case-Shiller composite 20-city home price index rose 0.3% to 146.22 in September -- its sixth straight increase. Similarly, the Federal Housing Finance Agency reported that its home price index rose a seasonally adjusted 0.2%. Both numbers point to a continued strength in the housing market.

The last report was the Conference Board's Consumer Confidence Index, which rose to 73.7 in Novermber -- beyond analyst expectations of 72.2 and a nearly five-year high. The markets are relatively unchanged as they ignore the positive news and focus on Congress as it continues to negotiate the budget and hopefully avoid the fiscal cliff. Some stocks are trying to help the Dow finish up. Here are the top two.

Today's Dow leaders
Today's Dow leader is Intel (NASDAQ:INTC), up 0.93% to $20.09. Intel's rise follows Apple's (NASDAQ:AAPL) announcement that it would begin selling a new 21.5" iMac on Friday and a new 27" iMac in December. Both these products will include Intel processors. Intel has also been in the news recently: Last week the company announced that its CEO of eight years, Paul Otellini, will step down in May, two years before he reaches Intel's mandatory retirement age of 65. The stock stepped down almost 4% on the news but has since recovered half of that drop. Fool analyst Tim Brugger wrote what he thinks Otellini's resignation means for Intel. Click here for his take.

Second for the day is Coca-Cola (NYSE:KO) up 0.6% to $37.70. The stock is up on no real news except that it goes ex-dividend tomorrow. The company pays a $0.26 quarterly dividend, which gives the stock a yield of 2.7%. There is absolutely no question that Coca-Cola has been great to long-term shareholders, but the company faces some new threats to its continued market dominance. We've recently compiled a premium research report containing everything you need to know about Coca-Cola. If you own or are considering buying shares in the company, you'll want to click here now and get started!