This morning's only U.S. economic release was positive for stocks. 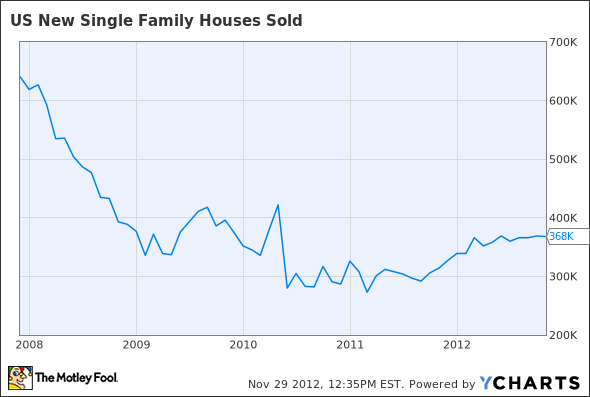 The new-housing market has been seeing gains lately, coming off the lows of 2010 and 2011. Strength in the housing market bodes well for the economy, and the market would likely be up more were it not for the continuing fiscal cliff talks in Congress.

House Speaker John Boehner spoke to reporters after meeting with Treasury Secretary Tim Geithner, and complained that Democrats have not come forward with ideas for cuts to government programs. Republicans want spending cuts, and tax increases need to be part of any deal on the fiscal cliff.

The markets are relatively unchanged as they ignore the positive news and focus on Congress as it continues to negotiate the budget and hopefully avoid the fiscal cliff. Some stocks are trying to get the Dow to finish up -- here are the top two.

Today's Dow leaders
Leading the Dow today is UnitedHealth (NYSE:UNH), up 2.07% ($1.09) to $53.84. UnitedHealth chopped its earnings-per-share guidance for 2013 on Monday to $5.25-$5.50 for the year, below analysts' expectations of $5.58. CEO Stephen Hemsley had hinted back in October that analysts' estimates for 2013 looked too optimistic, but this is the first time that Hemsley put actual numbers behind those comments.

As the largest health care company in the U.S., UnitedHealth is in a great position to benefit from Obamacare, as long as the company can offset its increased costs with the large number of new customers the law will provide. If you're looking for more in-depth research on the company's prospects in a post-Obamacare world, check out the Fool's premium research report on UnitedHealth. It comes with a full year of analyst updates to keep you covered as key news develops, so don't miss out -- simply click here now to claim your copy today.

Coming in second on the Dow so far today is Hewlett-Packard (NYSE:HPQ), up 1.53% ($0.20) to $12.93. After plummeting 12% last Monday when the company announced it would take an $8.8 billion writedown largely on its 2011 purchase of Autonomy, the company finished the week down just 6%. HP is accusing the selling executives of fraud, which Autonomy founder Mike Lynch wholeheartedly denies. Lynch asked HP to provide specifics on what it was accusing him of but HP has denied that request, writing:

While Dr. Lynch is eager for a debate, we believe the legal process is the correct method in which to bring out the facts and take action on behalf of our shareholders. In that setting, we look forward to hearing Dr. Lynch and other former Autonomy employees answer questions under penalty of perjury.

Fool analysts Joe Magyer and Jason Moser recently discussed whether HP is a value play or a value trap on The Motley Fool's MarketFoolery podcast with host Chris Hill. Click here to hear their take on the situation at HP.