The monthly employment report is the single most-watched piece of economic data that exists. Every report is painstakingly predicted and analyzed in detail as soon as it is released.

Yet for how eagerly anticipated these reports are, there's been a frustrating trend for two years now: Very little has changed. Statistically, each of the past 23 employment reports has looked similar to all the others.

Any single employment report is highly suspect, given the shortcomings of sampling statistics. So it's helpful to look at averages. I prefer the rolling six-month average. It shows changes in employment stuck in a tight range for the past two years: 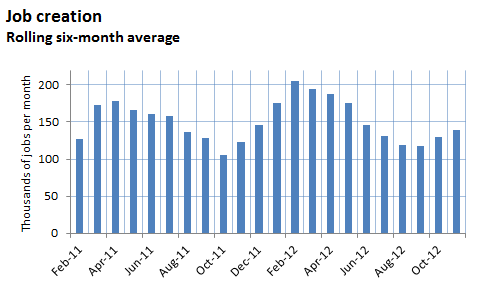 There have been ups and downs, most of which can be written off as seasonal noise and margins of error. But for the most part, employment has steadily grown by 150,000 a month since early 2011. Forget the breaking news, the deep analysis, the parsing, and the predictions. That's all you needed to know about jobs for the past two years.

The old rule of thumb is that the economy needs about 150,000 jobs just to keep up with population growth. But with an aging population and a growing percentage attending school, that figure is dropping, to perhaps 100,000 or less. So current jobs growth is enough to bring down the unemployment rate. Just very, very slowly.

Catherine Rampell of The New York Times explains just how slowly: "Getting the economy to 5 percent unemployment within two years -- a return to the rate that prevailed when the recession began -- would require job growth of closer to 270,000 a month." We are nowhere near that level of growth today. At current growth rates, it will be the early 2020s before a 5% unemployment rate is reclaimed. With figures like that, it may be worth redefining what "normal" is. 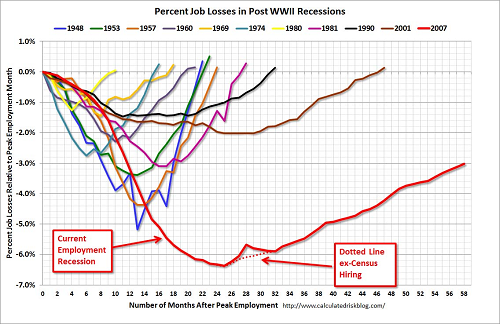 Beyond the noise of monthly jobs reports, here are a few trends and figures:

What do you make of today's jobs market? Share your stories below.