Please ensure Javascript is enabled for purposes of website accessibility
Log In Help Join The Motley Fool
Free Article Join Over 1 Million Premium Members And Get More In-Depth Stock Guidance and Research
By Alex Planes - Dec 11, 2012 at 11:30AM

Now that 2012 is nearly in the rearview mirror, investors are beginning to sift through the market for the best stocks of the upcoming year. The future is plagued with uncertainty, but that has always been the case, and it has never stopped us from seeking out long-term values. One way to find those values is to look for companies with a long history of success. The Dow Jones Industrial Average (^DJI 1.05%) contains many such companies, but some are better investments than others.

First-half recap
Home Depot has been one of the Dow's superstars in 2012, as you can see here: 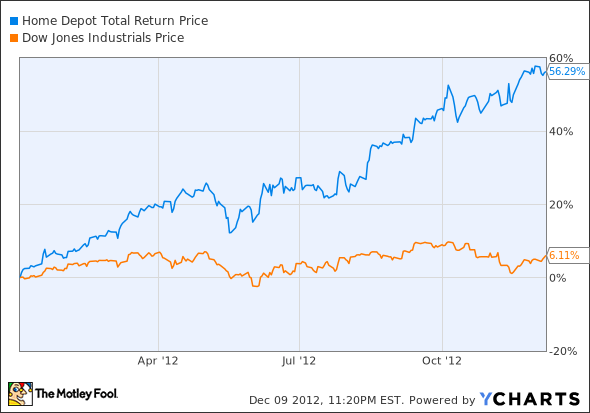 Let's take a look at a few financial snapshots of its recent performance to see if this growth has been driven by fundamentals or something else:

What the numbers don't tell you
At first glance, it certainly appears that Home Depot has generated more excitement than growth. A 16% growth rate is nothing to sneeze at, but it's also worth keeping an eye on valuation, which is at multiyear highs in terms of P/E and is almost 50% higher than it was at the end of 2011's third quarter.

There have been a number of economic narratives this year, but the one most on Home Depot's side is the housing rebound. Whether homeowners are sprucing up their places or homebuilders are buying up supplies, Home Depot and its home-improvement retailing peer Lowe's (LOW 1.54%) will benefit from the demand.

According to recent earnings reports, major homebuilders PulteGroup (PHM 6.54%), D.R. Horton (DHI 5.89%), and Hovnanian (HOV 7.97%) are all seeing substantial new-contract growth over 2011. This backs up recent reports that housing starts are at multiyear highs, just like Home Depot's P/E ratio.

The "sprucing up" option has also been gathering steam. A glance at paint companies Sherwin Williams (SHW 5.06%), PPG Industries (PPG 3.08%), and Valspar (VAL) shows three tightly focused companies that have grown at an even faster rate than Home Depot, with all but PPG well above their five-year average P/E ratios. Optimism is everywhere in the housing industry.

The Case-Shiller Home Price Index has finally bounced in 2012, which will be important in adjusting homebuying perceptions. No one wants to buy a house they expect will decline in value, particularly after witnessing the financial horrors of the housing crash. Stronger home prices create more demand for all the things you'd find in a Home Depot.

The only issue with Home Depot -- which is an issue shared by many construction-related peers -- is that its valuation is getting ahead of its fundamentals. Exuberance precedes recovery. If you've been riding that excitement over the past year, you're in great shape -- but if you're looking at home improvement stocks today, it's worth considering how much growth Home Depot will need in 2013 to justify another year of gains like 2012's. The 14.1% analyst consensus doesn't seem optimistic enough.