Please ensure Javascript is enabled for purposes of website accessibility
Log In Help Join The Motley Fool
Free Article Join Over 1 Million Premium Members And Get More In-Depth Stock Guidance and Research
By Aimee Duffy - Dec 28, 2012 at 11:29AM

A look inside the Permian Basin.

To help Foolish investors better understand the oil and gas boom in the United States, we are putting together a series of articles focusing on the major energy plays in the Lower 48. Today, we'll take a look at the Permian Basin.

Between 1921 and today, roughly 29 billion barrels of oil have been pumped out of the Permian Basin. The play is one of the largest in the U.S., and remains an important source of our domestic crude supply.

All about the Permian
The Permian Basin is an oil and gas play that stretches from West Texas into southeastern New Mexico. 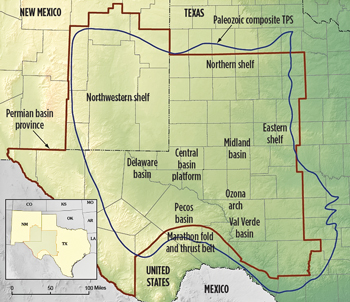 Geologically, the Permian is comprised of a mix of carbonate and sandstone. The basin is made up of numerous formations, some of which are stacked on top of each other in certain locations.

Investors may notice the combination of formation names in press releases and presentations. For example, "Wolfberry" denotes wells that are drilled where the Wolfcamp formation sits below the Spraberry formation. Deep vertical wells can access both formations. Producers may also use horizontal drilling when focusing solely on producing shale formations, like the Wolfcamp.

Some fields in the Permian are very mature, and in order to maximize production, many operators use carbon dioxide flooding in a process known as enhanced oil recovery, or EOR. Occidental Petroleum (OXY 3.53%), the biggest producer in the Permian, uses carbon dioxide EOR to increase recovery by 15%-25% in certain fields.

Players
Those 82,000 wells provide ample opportunity for a variety of producers to cash in. The top five producers in the basin are Occidental, Kinder Morgan (KMI 1.96%), Apache (APA 3.50%), Pioneer Natural Resources (PXD 2.02%) and Chevron (CVX 1.40%).  Here is how the rest of the leader board shakes out: And the corresponding acreage: It has been a busy 2012 in the Permian, and these charts may look significantly different by the second quarter of 2013.  For example, Chevron added to its position by picking up a few hundred thousand acres from Chesapeake Energy (CHKA.Q) in September.  And most recently, SandRidge Energy (NYSE: SD) sold its Permian acreage -- with the exception of 15,900 net acres belonging to SandRidge Permian Trust (PER) -- to the privately held Sheridan Production Partners II.

But lets get back to our leaders. Occidental Petroleum is by far the largest producer in the basin. Operating on over 3 million net acres, Oxy and its subsidiaries produced over 50 million barrels of oil in the Permian in 2011 and was averaging 144,000 BOE per day by the end of the third quarter of this year. The company's production accounts for 15% of the oil produced in the entire state of Texas.

You get a much better sense for Oxy's dominance when you take a look at the second highest oil producer in the Permian, Kinder Morgan. Kinder Morgan produced about 18.5 million barrels in 2011, just over a third of Oxy's total production. The company also happens to be the largest marketer and transporter of CO2 in the country, making the Permian Basin one of its most important markets.

Apache is the third-largest oil producer in the Permian Basin, finishing right behind Kinder Morgan in 2011 with 17.4 million barrels of oil. However, through the first three quarters of this year, Apache was producing over 60,000 BOE per day and will likely overtake Kinder Morgan and rank as the second-highest producer in 2012.

Economics
The Permian Basin is unique in the sense that it features long-producing vertical wells as well as brand-new horizontal wells. As such, it can be qualified as both a mature field and a speculative play. Though the basin contains oil, gas, and natural gas liquids, most producers are in it for the black stuff.

Because producers drill both vertical and horizontal wells in the Permian, drilling and completion costs vary widely, from around $1 million to more than $7 million per well. The estimated ultimate recovery (EUR) for a Permian Basin vertical well is between 125,000 and 150,000 BOE, while horizontal wells yield much more, averaging an EUR anywhere from 350,000 BOE to more than 600,000 BOE.

Over the course of this year, rig counts fluctuated moderately, and as the price of oil fell you can see a slight decline in horizontal drilling and an uptick in vertical drilling: The graph above confirms horizontal drilling's overall dominance. However, the real story here is how rig counts pair with production:

Data compiled by the EIA shows that production has grown roughly 200,000 barrels per day since July of 2009.

The high level of activity in the Permian Basin reflects both the new potential of shale drilling and the high price of oil that makes that method possible. The breakeven cost of doing business in the Permian Basin is about $50 per barrel, but obviously that will fluctuate depending on whether your company is producing from mostly horizontal or vertical wells.

Shipping out
Of course, producing all that oil is useless without pipelines to ship it to the Gulf Coast for refining. Midstream players like Plains All American Pipeline (PAA 0.20%) are crucial to the success of the Permian Basin producers.

Between 2009 and 2013, Plains will have spent more than $300 million building out infrastructure in the Permian Basin. This past August, the partnership announced that three pipeline projects in the Permian totaling $135 million would all come into service by the end of this year. The lines add 200,000 barrels per day of takeaway capacity to the region.

Magellan Midstream Partners (MMP 1.53%) is getting in on the Permian action as well, teaming up with Occidental to construct the 450-mile BridgeTex pipeline. The crude oil line will carry about 300,000 barrels per day from the Permian Basin to refineries in the Houston Ship Channel and Texas City. The line should be up and running by 2014.

All told, 1 million barrels per day in new takeaway capacity is expected to come online by the end of 2014.

Overall attractiveness
Pipeline capacity will continue to increase over the next few years, which is good, because despite the history of oil production, midstream infrastructure isn't quite meeting the needs of producers in the Permian Basin right now. Back in August, the energy consultancy Bentek estimated that oil supply would surpass pipeline capacity by early 2013. That has already happened it seems, as limited takeaway capacity out of the region has resulted in crude oil just sitting at the hub in Midland, which in turn is contributing to its discounted price against crude delivered at Cushing, Okla.

Again, the pipeline story will continue to improve in the next few years, but investors should be aware of the impact price differentials may have on earnings in the near future.

Otherwise, the Permian Basin is a pretty attractive play because costs are generally lower than in other high-profile plays like the Bakken Shale. BHP Billiton's (BHP 1.14%) PetroHawk built its position in the Permian for about $1,400 per acre, but that was between 2010 and 2011. This past September, Shell (RDS.A) purchased 618,000 acres in the Permian from Chesapeake Energy. The company paid $1.935 billion, which amounts to about $3,100 an acre. As with any oil and gas play, the price of acreage in the Permian will fluctuate based on demand and the region's estimated production capabilities and reserves.

Foolish takeaway
Bentek Energy estimates production in the Permian Basin will grow 60% between now and 2016, reaching a total of 1.8 million barrels per day. Though that is far from the basin's peak production of 2.085 million barrels per day in 1973, it is closer than most would have imagined. The USGS estimates there are an additional 2.6 billion barrels of oil that could be added to the Permian's reserves, qualifying that figure by acknowledging that the oil may not be economical to produce right now and would take more CO2 for injection than is currently available. Still, the oil is there, which means the Permian Basin will remain a fixture on the U.S. energy scene for quite some time and investors should take note.