Should you buy or sell Eli Lilly (NYSE:LLY)? That's the question we're focusing on in a series of articles that grade key areas for the pharmaceutical giant. We recently looked at Lilly's current product lineup and identified several strengths and weaknesses.

A pharmaceutical company's prospects, though, stem largely from the drugs in the pipeline. Let's examine Lilly's pipeline to see if it can make the grade for individual investors.

Breadth and depth
A drug pipeline can be broad in that it spans several therapeutic areas. It can also be deep by including plenty of drugs in each clinical stage. Let's look at the breadth and depth of Lilly's pipeline. 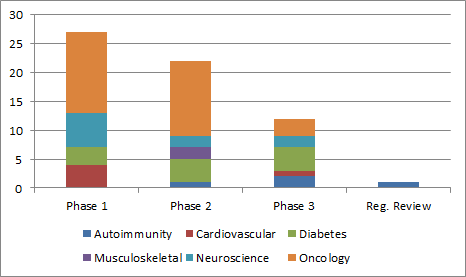 Lilly compares favorably to similar-sized peers with respect to the quantity of drugs in its pipeline. The company counts 12 drugs in phase 3 studies compared to 8 for Bristol-Myers Squibb (NYSE:BMY) and 10 for AstraZeneca (NASDAQ:AZN). Lilly's early and mid-stage pipeline includes 49 drugs. Bristol and AstraZeneca have 46 and 58 drugs, respectively, in early and mid-stage clinical studies.

Late-stage likelihood
The key to success over the next few years rides on the potential for Lilly's late-stage drugs. How likely are these drugs to gain regulatory approval and be commercial winners?

Much speculation has centered on the prospects for Lilly's Alzheimer's disease drug, solanezumab. In August, Lilly announced that the primary endpoints of two phase 3 studies of the drug were not met. While this was certainly bad news, the company also noted that an analysis of pooled data across both studies found a slowing of cognitive decline in patients with milder forms of the disease.

Further clinical studies for solanezumab will be undertaken. The odds for success are still probably low, though. Alzheimer's has proven to be quite difficult for any drug to combat. Earlier this year, Pfizer (NYSE:PFE) and Johnson & Johnson (NYSE:JNJ) halted development of their potential Alzheimer's drug bapineuzumab after studies found no improvement compared to placebo.

More less-than-stellar results came in December from another pipeline drug, tabalumab. Lilly halted one of three phase 3 studies after the drug was found to be ineffective in treatment of rheumatoid arthritis. However, the company plans to continue the other two phase 3 studies for rheumatoid arthritis, as well as an ongoing phase 3 trial targeting treatment of lupus.

Lilly faces another possible uphill battle with cholesterol drug evacetrapib. Evacetrapib inhibits production of the cholesterol ester transfer protein, or CETP, with the goal of increasing HDL, commonly referred to as "good" cholesterol. In May, Roche pulled the plug on its CETP inhibitor after the drug was found to be ineffective. That failure raised questions about the probability of positive results in phase 3 trials of evacetrapib.

A more likely source of pipeline success is diabetes drug dulaglutide. In October, Lilly announced positive phase 3 results for the drug. In three late-stage studies, the company found that dulaglutide attained superior results than rival diabetes drugs from Bristol-Myers Squibb and Merck (NYSE:MRK). Lilly plans to submit the drug for regulatory approval in 2013.

Another possible winner for Lilly could come from ramucirumab. The company announced positive results in October from a phase 3 study focusing on use of the drug in treating metastatic gastric cancer. Those results found that ramucirumab improved overall survival rates progression-free survival rates. Several other phase 3 trials targeting other types of cancer, including breast, colorectal and lung cancer, are also under way for the drug.

Making the grade?
So, what grade does Lilly's pipeline deserve? I think we can safely rule out giving it an "A." There are too many late-stage disappointments already. We can also rule out giving the pipeline an "F" with some drugs still showing potential.

A grade of "B" would mean that we consider Lilly's pipeline as good. Considering the lack of high probability of a huge winner, I don't think that rating would be warranted, either. That leaves us with giving a grade of "C" or "D."

My inclination is to go with "C." This grade reflects an average score for Lilly's pipeline, which seems about right. Every pharmaceutical company has its share of successes and failures with drugs in late-stage studies. Lilly is no exception.

We now have grades on two important areas for Lilly -- current product lineup and pipeline. However, there is more to consider to determine the overall grade for investors to use in evaluating the stock's potential. Stay tuned in the coming days for additional analysis in our detailed scoring of Lilly.