You may have seen this meme making the rounds. A Twitter user got curious about tablet gifts this Christmas, and sat down to compile a snappy infographic: 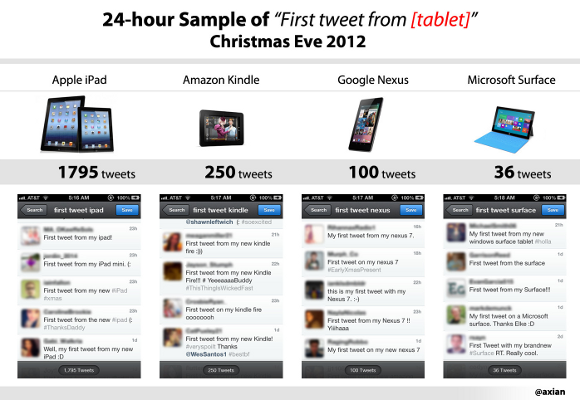 It's the result of searching for "first tweet ipad" and other tablet models, done early in the morning on Dec. 26. The Apple (NASDAQ:AAPL) iPad towers over all other options in this comparison, scoring 50 times as many happy tweets as the Microsoft (NASDAQ:MSFT) Surface, 18 times the combined presence of Google (NASDAQ:GOOGL) Nexus devices, and seven times Amazon's (NASDAQ:AMZN) Kindle.

It's an impressive victory, but hardly the kind of data you can build an investment thesis on. Let me riddle this chart full of potential holes. In the time-honored style of David Letterman, tongue firmly planted in cheek:

There's probably a grain of truth in the graphic, but investors should take it with a generous pinch of salt. Just sayin'.