Netflix (NASDAQ:NFLX) CEO Reed Hastings must be doing something right. In an SEC filing posted on Friday, the company said it will double his paycheck in 2013. Cash and stock options of $2 million each add up to $4 million, up from $1.5 million in options and a paltry $500,000 cash portion in 2012.

This is the largest cash payment Hastings has ever received. The options component doesn't break any records, but it matches the second richest stock-based award in the CEO's rocky history. The sum total is a brand new all-time high: 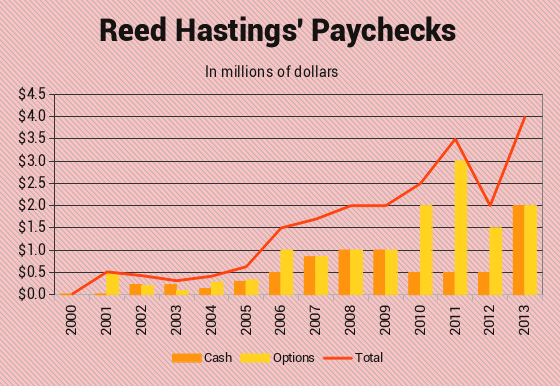 I know what some of you are thinking. "Is the compensation committee insane? Are they rewarding Hastings for mediocre performance at best, along with a disastrous long-term business strategy?" After all, he has essentially promised that there won't be any bottom-line profits or positive cash flows for the next few years while Netflix invests in international expansion projects. Meanwhile, he's signing billion-dollar content contracts where the payoff lies many years ahead. Crazy, crazy, crazy.

And I call shenanigans on that myopic thinking. Hastings is meeting the performance targets his board set up, and that committee clearly trusts that he isn't driving the company off a cliff without a parachute. 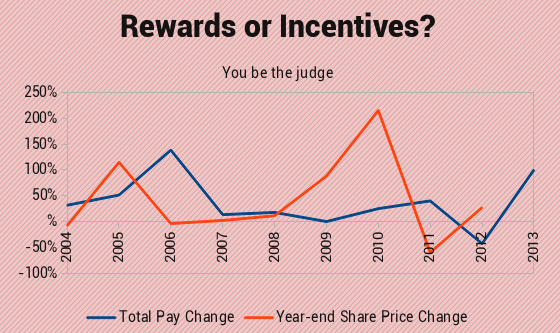 Netflix has a history of bumping Hastings' pay after big victories, rather than giving him incentives for charging ahead. So we're looking at a break in tradition here. This isn't a reward for services past, but a sign that the board trusts Hastings and his leadership.

Yes, there's an unprecedented amount of competition in the domestic market. Coinstar (NASDAQ: CSTR) and Verizon (NYSE:VZ) are booting up their part-subscription Redbox Instant service as we speak. Hulu is seeking new direction, and may end up a far closer Netflix rival in the next few months. Cable companies are paying more attention to digital media and on-demand programming, and I'm betting my own money that TiVo (NASDAQ:TIVO) will help them do it right. And I haven't even mentioned Amazon.com (NASDAQ:AMZN) and its increasingly independent movie rental services.

And against that ominous backdrop, Hastings sets his sights on distant shores?

Yes indeed, I would argue that the board is telling him to go ahead and secure his company's long-term future. Domestic growth won't last forever, but there are billions of potential customers just waiting for a serious digital entertainment option overseas. Hastings deserves an "attaboy" for chasing them while the fruit still hangs low.

You heard it here first.